How the Oil and Gas Sector Uses Social Media in 2023 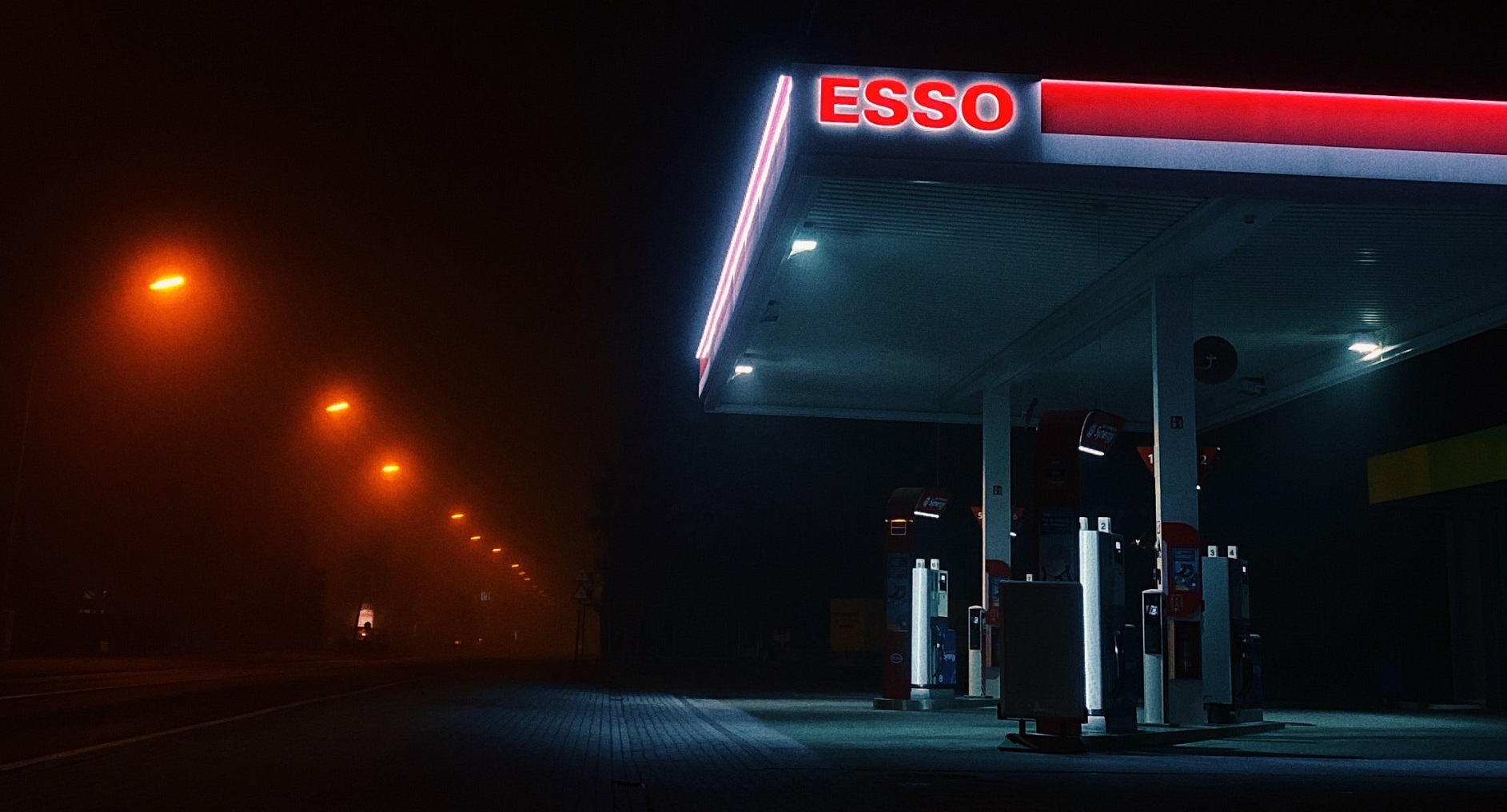 With oil and gas prices reaching an all-time high, the energy sector has been in focus more than usual. Let’s look at how the oil and gas sector uses social media in 2023.

Things You Need to Know About the Oil and Gas Space

The oil and gas (O&G) industry earned record profits in 2022, growing from $6,098.98 billion in 2021 to $7,107.49 billion in 2022 at a compound annual growth rate (CAGR) of 16.5%. Although high energy prices and record cash flows for O&G companies don’t look great on paper, 93% of O&G executives state they’re positive about the industry in the coming year. The hope is that they’ll be able to improve the underinvestment of recent years and eventually even out energy prices, which would ultimately boost their relationships with consumers. Heading into the year ahead with ample cash flow, many O&G companies will be able to influence the direction of the industry and establish specific trends. More on that shortly…

A Quick Look at Profits and Losses

As a general overview, profits of the world’s biggest oil companies soared to nearly 150bn as of October 2022. Here’s a more detailed breakdown. 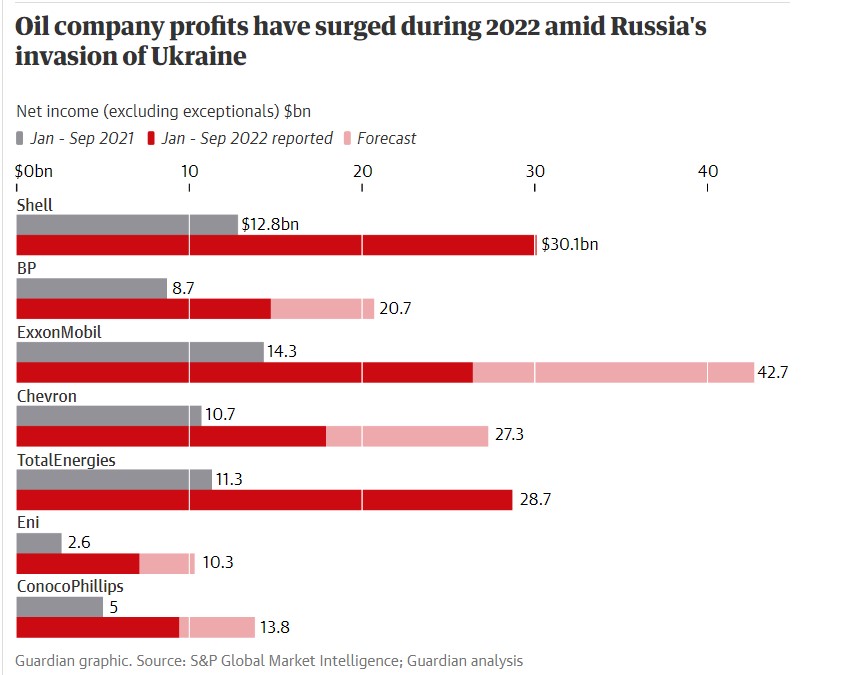 Is anything being done about the rising prices?

The answer to that is yes. As oil and gas producers in the UK are making extraordinary profits which are expected to continue, the government has raised the rate of the levy from 25% to 35%, bringing the headline tax rate for the sector to 75% and extending the duration of the levy. This ensures oil and gas companies that will benefit from the prolonged period of increased prices continue to pay their fair share of tax. Since Russia’s invasion of Ukraine, EU governments have also taken action. They subsidised oil consumption to the tune of $29 billion. While some government tax rebates were only conceived for an initial period of three months, many have extended them until the end of the year and into 2023. This has been criticised, however, with some arguing that subsidies increase demand, putting further pressure on prices. Fuel tax subsidies also predominantly benefit wealthier customers and are not targeted at the more vulnerable households.

O&G Trends and the Social Media Tactics You Should Know

Industry fragility isn’t new. But with unprecedented price hikes and crazy profits dominating the headlines, what oil and gas trends should we be watching out for in the New Year and how is O&G marketing being impacted? Let’s also take a closer look at social media tactics and the platforms being used.

With impressive cash flows, more O&G companies are increasing their investment in clean energy. This supports global initiatives to reduce emissions, with the UN’s Intergovernmental Panel on Climate Change hoping to slash CO2 emissions by 45% by 2030, compared to 2010 levels. Environmental concerns are huge right now, with companies striving to grab the attention of the environment conscious consumer. So how is this being reflected on social media? Well, Chevron is lowering the carbon intensity of their operations and posting about it on Facebook with blogs detailing their very own emission saving missions. 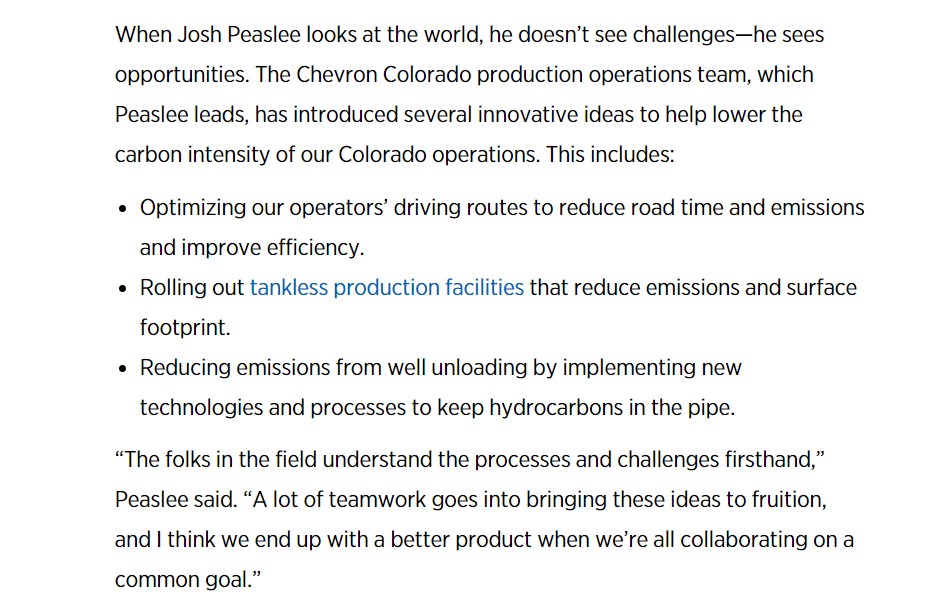 Top Tip: Get clever with content marketing. Instead of posting a simple statement on social media, back it up with a blog link or a video clip that further emphasises your point. Make sure all content is original and hasn’t been directly copied from another source as this will help to set you apart as an industry leader. Bullet lists are easy to read and attention grabbing. Don’t forget those gripping headlines too but avoid being clickbaity. Make sure your title matches the content you’re offering.

Shell is another company talking about their clean energy initiatives on platforms such as Instagram. They use hashtags such as #PoweringProgress and #decarbonisation to enhance the relevancy of their content and to make it searchable. Shell Energy uses in-feed videos to illustrate their goals and has an entire Stories section dedicated to their Net Zero transmission efforts. Cool stuff. Using the Stories feature is a great way to document a journey and provide behind-the-scenes details about company aims and initiatives. 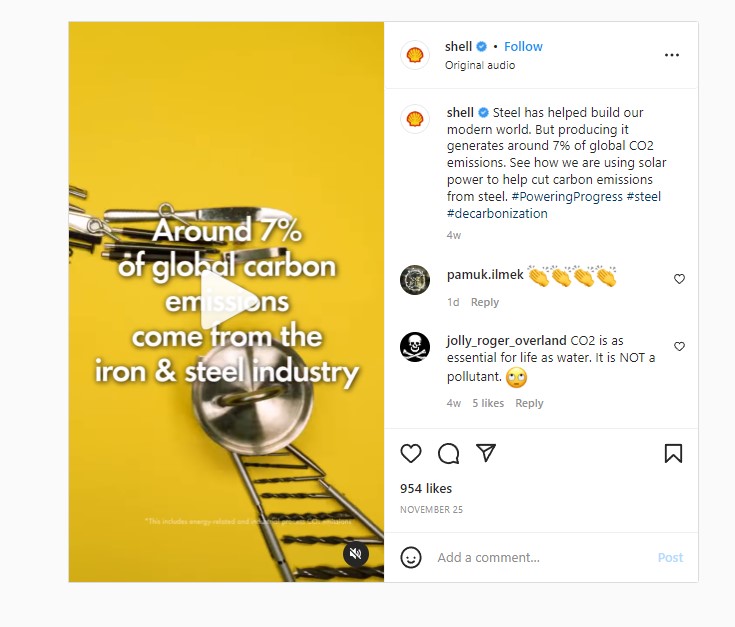 Hop over to LinkedIn and Shell Energy proudly promotes their sponsorship of the Smart Energy Decisions Renewable Energy Forum in Huntington Beach, CA. According to the energy provider, the conference is a ‘great place to learn more about #decarbonizing your business’ and they’re ‘excited to connect with colleagues’ as they wind down 2022 and make plans for 2023. This business-orientated post is perfect for Linked-In and also hints at their clean energy initiatives for the year ahead.

Top Tip: Make sure your content matches the social media platform you’re using. LinkedIn is a great place to post job ads, collaborations, partnerships, sponsorships and more, whereas you might want to keep things more light with a fun video on TikTok.

Interestingly, companies such as BP and Chevron as well as groups like the American Petroleum Institute (API) – a trade organisation representing over 600 members in the oil and gas industry – have started domestic advocacy campaigns as a solution to the oil and gas supply worries and price hike crisis. According to reports, since the start of the war in Ukraine, BP has launched ads featuring slogans such as ‘We’re backing Britain’ and ‘Homegrown energy’, while others promoted North Sea oil and gas and the UK’s ‘plan to boost long-term energy security.’

Scottish Power is one such company that’s cleverly woven domestic advocacy into their recruitment drive. The brand encourages people to ‘register their interest in job opportunities’ via LinkedIn following a very strong statement about being a ‘leading developer, installer and operator of onshore and offshore renewable technology across the UK and Ireland.’ They also focus on staff being focussed on ‘supporting our communities’ which implies they keep things very close to home and are community orientated.

Similarly, the API campaign promoted ‘American-made energy’ and ‘American natural oil and gas’ on Facebook. As you can see from recent posts by API, restoring US energy leadership is a huge topic of conversation with detailed blogs being shared across social media. The company has also put a huge focus on getting natural gas from the United States with explanations for this given in video format to really drive home the point. 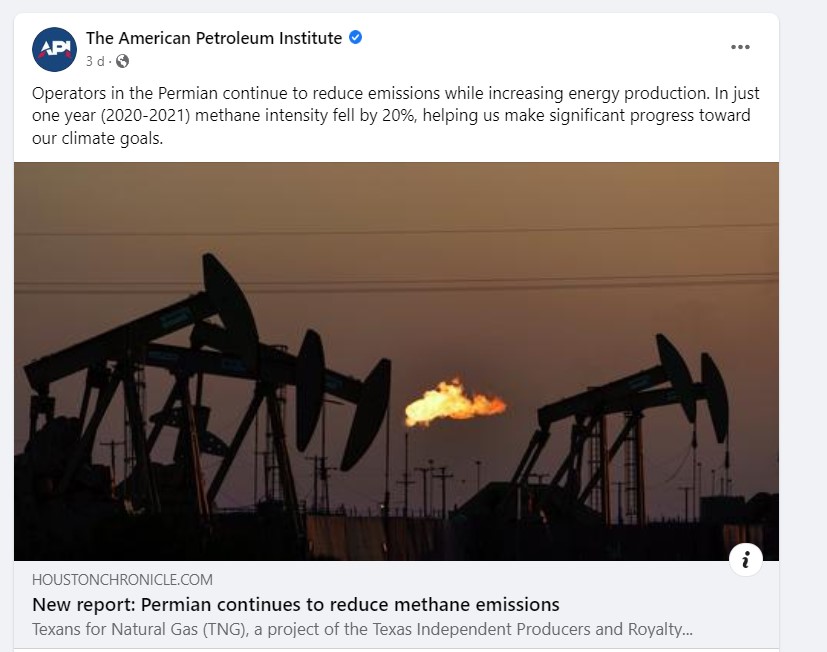 Top Tip: People learn and absorb information in different ways. So publish a wide variety of written and visual content to appeal to a wide range of consumers. Explainer videos are always good when trying to communicate trickier topics.

Promoting to a Younger Audience

In a bid to influence younger generations and improve their public image during the energy crisis, many oil and gas companies are also hitting up TikTok which is popular with Millennials and Gen-Z. Octopus Energy, for example, focuses on apps, gadgets and smart metres that appeal to a  younger, more tech-savvy audience. This is particularly relevant at a time when youngsters are worried about their outgoings and budgets. Octopus Energy is also tech-savvy on Twitter, focusing on turning branded OctoPoints into energy credits through the #SavingSessions dashboard. Essentially, consumers are given an incentive to save electricity at peak times in return for rewards worth up to £100. Now that’s clever marketing. Not only does it encourage consumers to be more eco-conscious but it also taps into the notion that people will do anything to save money during the current crisis. 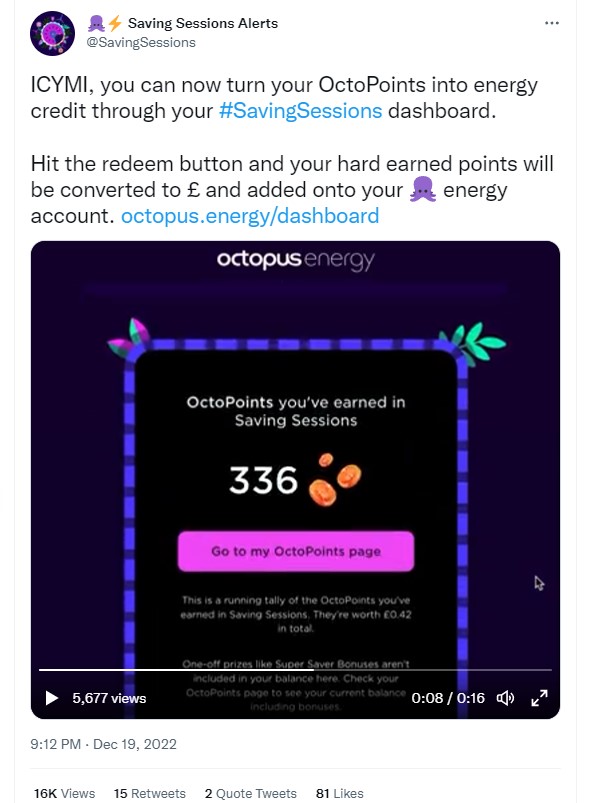 Many brands are keen to point out the challenges they’ve faced throughout the year and the solutions they’ve implemented to get through periods of change. This helps to create an authentic touch and build good relations with consumers. E.ON’s Chief Executive Officer, for example, posted a reflective end of year video to LinkedIn which received close to 700 interactions. The storytelling element of the video resonated with followers and the post received positive responses. The lesson here is not to bluff or blag. People can see right through company lies and would prefer a more realist approach. 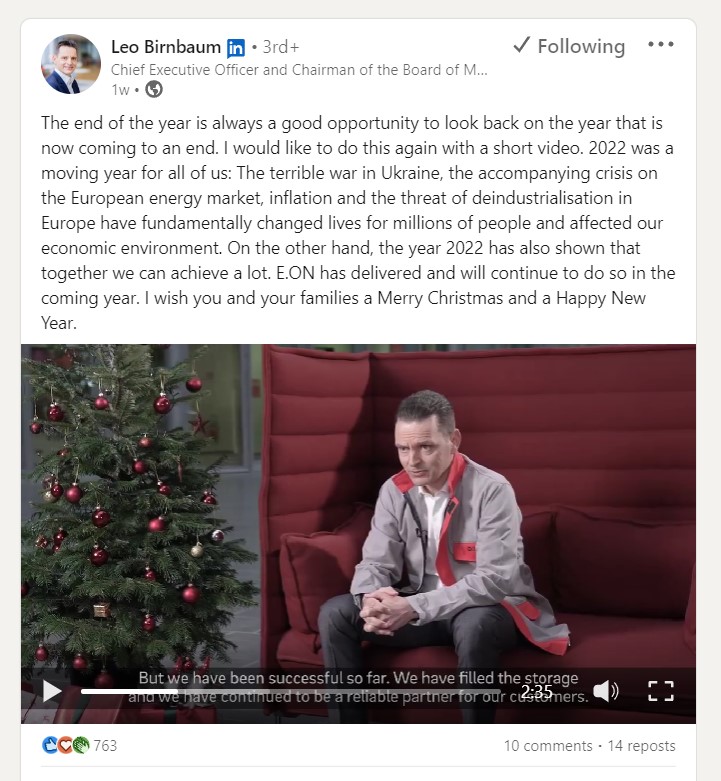 Top Tip: Build trust by putting a face to your company. Featuring leading team members and thought leaders in your posts is a good way to bring your brand to life.

As a leading marketing agency for the finance space we are tuned into the oil and gas space. We create analysis, whitepapers, social media posts and content for our clients in the banking, forex, tech and fintech spaces. Talk to us about your 2023 marketing strategy. Loved reading How the Oil and Gas Sector Uses Social Media in 2023? Go ahead and hit share.