Elections are big news. They’re the cornerstone of democracy. And while political candidates used to communicate on TV, in print or through official rallies, social media has changed the election game. Official online newspapers were once the go-to source to find out what the front runners were up to. But with channels like Facebook, Twitter, Instagram and YouTube being used directly by candidates, it’s easier than ever to hear from candidates. Join us as we delve deeper into the rollercoaster of elections. From the best social media strategies to mind-blowing ad spend and election social media fatigue, we’re turning over all the stones. With the US election looming on 3 November 2020, wish us luck as we get a bit too close for comfort checking out Trump, Biden and crew. Here’s our take on winning elections on social media.

Is social media relevant in an election? The answer to this is most definitely yes. Trump has a whopping 87.3 million Twitter followers alone and over 30 million followers on Facebook. Biden also has 11.2 million Twitter followers and 3 million+ on Facebook, which shows that political rhetoric shared on these channels matters. If you’re interested in the elections, social media is a great way to keep up with the latest. Especially with both candidates being extremely active in their social media canvassing.

Social media plays an important role in elections for other reasons too:

Trump’s alleged brush with covid-19 gave him leverage to promote the Trump Administration, for example. This was met by the predictable support and controversy now associated with social media politics. 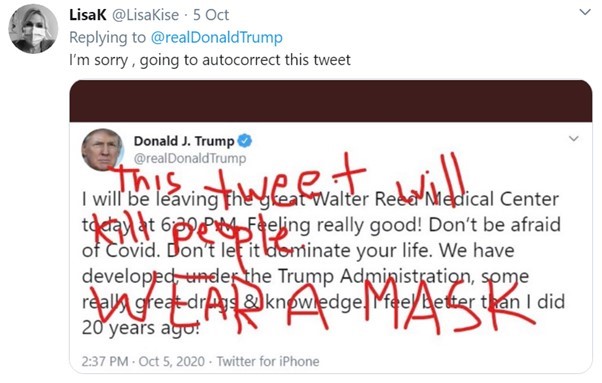 Interestingly, social channels like Snapchat could also impact the outcome of the 2020 elections. Snapchat is reportedly working to get younger users to register to vote ahead of the next general election and in October 2020 announced they had helped 1,164,000 Snapchatters register to vote in 2020 alone. In February, they launched a new voter registration initiative, which pushes notifications to user profiles when they turn 18 with directions to register to vote.

This is significant as the company was able to successfully register 450,000 people through its app during the 2018 midterms. Now, new data from DemocracyWorks shows that 57% of those registered actually went out and cast ballots. Snapchat’s largest demographic is 18-24 years old, an age group which are usually shy or uninterested in casting a vote without the influence of social media.

In 2018, Snapchat also launched a range of election day stickers and lenses to encourage users to vote, along with listings of polling locations in the Snap Map. 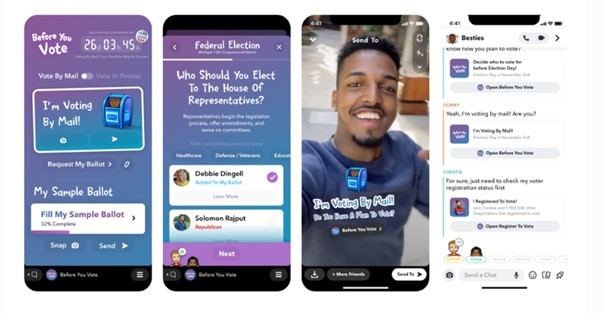 How are US Presidential Candidates Using Social Media in 2020?

It’s clear that social media has a significant role to play in the US elections 2020. But how are the candidates using social mediums to communicate, influence and persuade in an election that could have the biggest voter turnout in 2020?

Before we delve further into that, let’s just look at this year’s election stats:

Matters of race have been a huge topic surrounding the election with celebrities such as P. Diddy getting heavily involved in race related election discussions on Twitter. 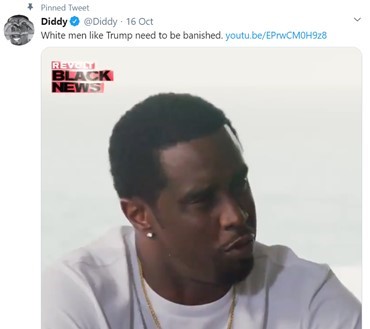 So how are Trump and Biden presenting their campaign online? And … What does their social media spend look like?

The campaigns of Donald Trump and Joe Biden together cost US $65.8 million on social media advertising between 1 June and 13 September, according to Syracuse University’s Illuminating 2020 project. The project tracks the spending and the targets of Facebook and Instagram ad buys based on data provided by the platforms. About 40% of that spending came between 10 August and 13 September, when the campaigns spent a combined $27 million online. With digital ads, amounting to about 30% of both campaigns’ spending, both candidates are trying to mobilise voters. 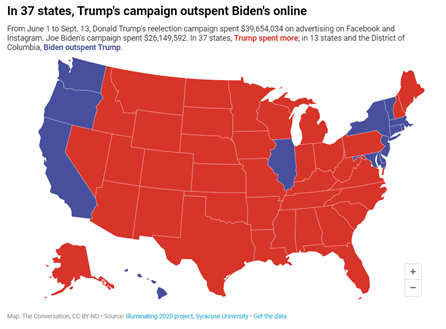 70% of the campaigns’ spending is aimed at persuading voters. Nearly all of Trump and Biden’s campaigns online involve some sort of call to action, urging viewers to do something such as give money, sign a petition, answer a poll, sign up to get emails or watch a video ad. Those ads also help the campaigns gain additional data about supporters such as what they are interested in and how they’re involved in the community. Of course, in the aftermath of the Cambridge Analytica scandal, all eyes are on data targeting and avoiding data leaks that could influence an election.

Between June 1 and Sept. 13, Trump spent $34.5 million, 86% of his total online spending during that period, on calls to action. In that same period, Biden’s calls to action cost $23.4 million, or 89% of his online ad spending.

Calls to action also take on a multi-pronged, multi-channel approach 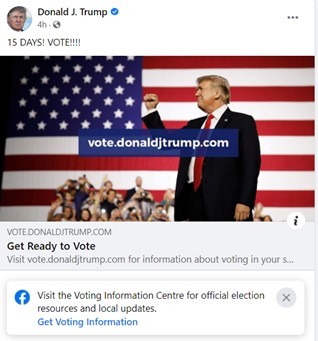 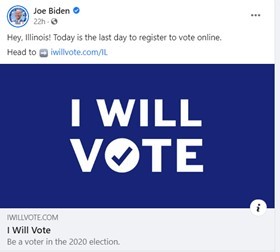 What Other Election Tactics Get Used?

Other tactics used by the political teams include going hard on YouTube. And there’s good reason for this. In the third quarter of 2020, it was found that 77% of US internet users aged 15 to 25 years accessed YouTube. With over 126 million unique monthly viewers, YouTube is by far the most popular online video property in the United States.

So what did they do? Well, Joe Biden made a splash when his campaign bought out YouTube’s homepage with an ad about sports stadiums that had been left empty by the coronavirus pandemic and Trump’s leadership. The ad got more than 10 million impressions, his most ever on the site. This was, of course, accompanied by relevant, easy to follow hashtags including #JoeBiden #Joe2020 and #BidenForPresident. Including hashtags in a campaign makes content simple to find and engage with. Trending hashtags also help built campaign momentum. 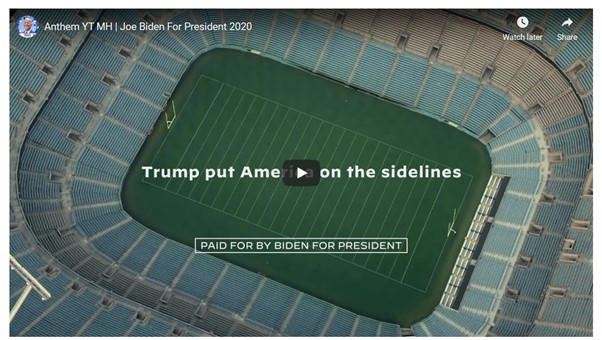 Not one to be outdone, however, Trump ads are set to take over YouTube’s front page on election day. That’s right, the campaign has secured one of the most high-profile spots on the internet. The reported deal ensured Trump will be featured prominently in the key days when voters across the country prepare to head to the polls.

While the bulk of digital ad spend typically focuses on targeting specific messages to certain audiences, the top spot on YouTube is more akin to a Super Bowl TV ad. About three-quarters of US adults say they use YouTube, exceeding the reach of Facebook according to the Pew Research Centre. Ads on the YouTube masthead generally run for an entire day, with estimates for the space ranging from hundreds of thousands of dollars to more than $1 million a day.

The move is likely to reinforce a feeling among many political analysts that Trump’s embrace of digital advertising gives him a distinct advantage over his Democratic rivals.

Aren’t There Any Rules?

With so much apparent social media freedom for presidential candidates, it’s natural to wonder if there are any advertising rules. The short answer is – yes there are, but it all depends on the channel. Here’s a rundown of some of the red tape.

Therefore it’s really important for candidates to maintain a strong and engaging rhetoric that doesn’t involve significant ad spend. Ways to do this include: 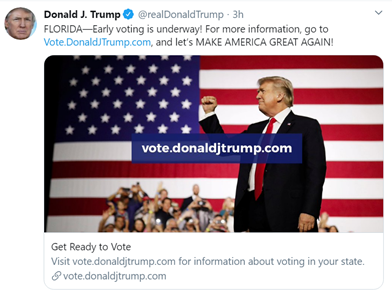 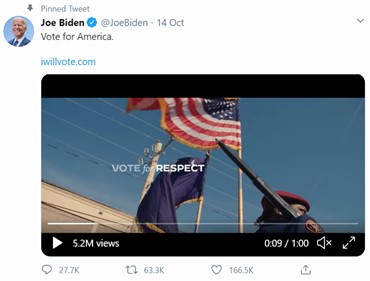 The tweet was regarding a video targeting Joe Biden and appeared to be directly from Trump’s handle. But in fact, Trump had shared a link from the campaign account’s video, maybe by using the company’s phone app or editing the code used to embed it. Again, many speculate that this is indicative of agency involvement. 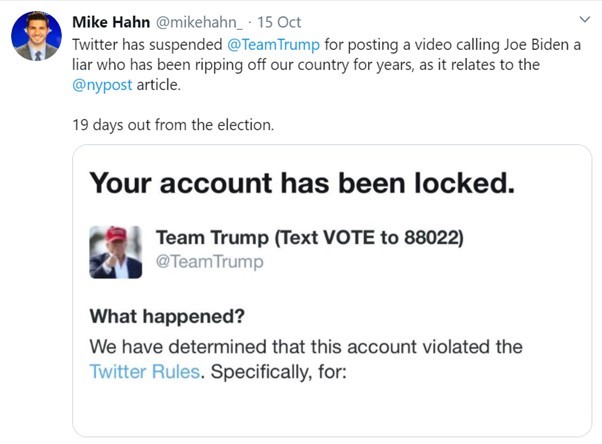 Popular micro-video site TikTok has also been used politically for malicious purposes. The lower-than-expected attendance at President Trump’s rally in Tulsa on June 20 was attributed, at least in part, to an online army of K-pop fans. They used the social network to reserve tickets for the rally as a means of pranking the campaign. This shows that no social media channel should be overlooked from a political perspective. Remember, Trump allegedly tried to ban TikTok… 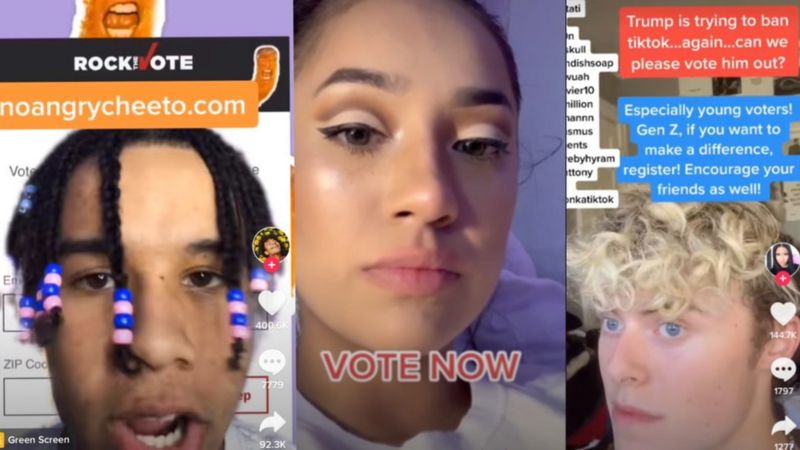 “Any paid ads that come into the community need to fit the standards for our platform, and the nature of paid political ads is not something we believe fits the TikTok platform experience.” 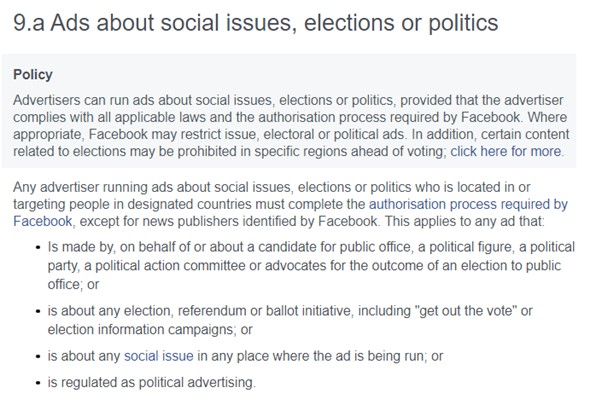 Google (owner of YouTube) restricts how precisely political advertisers can target an audience on its online services. A move that shook up the digital plans for the 2020 presidential election.

Political advertisers can aim their messages at people based on their age, gender or location. Google will also allow ads to be targeted to people based on the content of websites they visit. However, the ads can no longer be directed to specific audiences based on their public voter records or political affiliations categorized as “left-leaning,” “right-leaning,” or “independent,” the company said in a blog post.

The policy will apply to ads shown to users of Google’s search engine and YouTube, as well as display advertisements sold by the company that appear on other websites.

The Downfall of Social Media During an Election

It seems social media is the place to be during an election campaign. But is there a downside to so much online publicity?

Well, according to a Pew Research Centre survey of US adults conducted between July 13 and 19 2020, 55% of adult social media users said they felt ‘worn out’ by how many political posts and discussions they see on social media. This has risen by 18% since the Centre first asked this question in the summer leading up to the 2016 presidential contest and 9% in the past year. 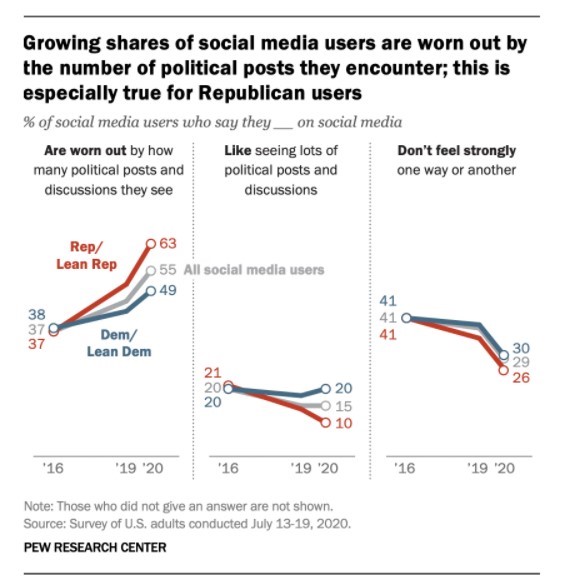 At the same time, users are less ambivalent about seeing these types of posts today than in the past. Today, 29% of social media users say they don’t strongly feel one way or another about encountering political discussions, down from about four-in-ten in 2016 and 2019.

What’s more, 7 in 10 social media users now say it’s stressful to talk politics on social media with people they disagree with, showing that there is some level of political social media fatigue. 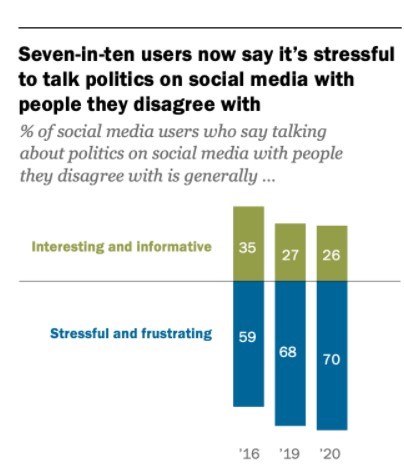 Social media remains a huge election tool for candidates as the 3 November 2020 US election looms. Reading the comments, following trending hashtags and monitoring the updates of sites can all contribute to a more rounded view of what’s happening.