Our Scoop of The Coolest Ice Cream Marketing 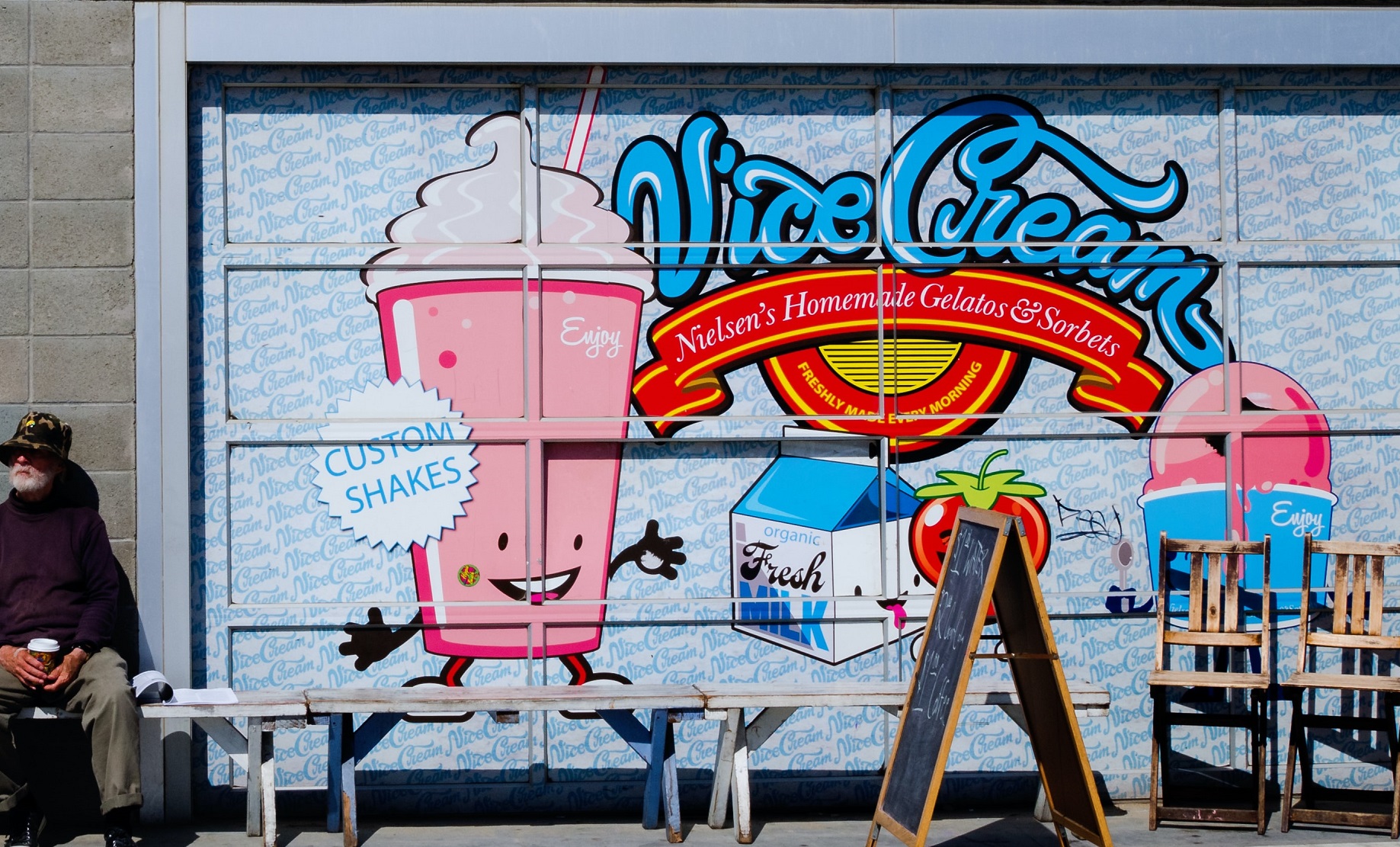 There’s no better way to cool yourself down in the sweltering summer heat but to enjoy a big bowl of vanilla ice cream. July is National Ice Cream month and there are entire teams working behind the scenes, coming up with eye-popping marketing campaigns that stimulate our senses. From provocative to sassy and playful, check out some refreshing and memorable marketing campaigns run by the world’s popular  ice cream brands. Here’s our scoop of the coolest ice cream marketing.

Ben n Jerry’s is already well known for being not just an ice cream brand but a company that sets the world’s sights on larger issues, whether it be saving the planet, fighting for fairer wages, or human rights. Every detail of their marketing operations is permeated with a larger purpose and it’s safe to say these guys are brand marketing kings. Being aware of all the matters that deserve to be in society’s spotlight, Ben n Jerry’s partnered with Collin Kaepernick and Brandan Odums and unveiled a provocative mural right before the Super Bowl kicked off.

Ben n Jerry’s wanted to point out the brutality aimed at Black people and address the root of racism. More importantly, Kapernick’s share from each pint is being invested in empowering and educating Brown and Black people and his Know Your Rights Camp Foundation. 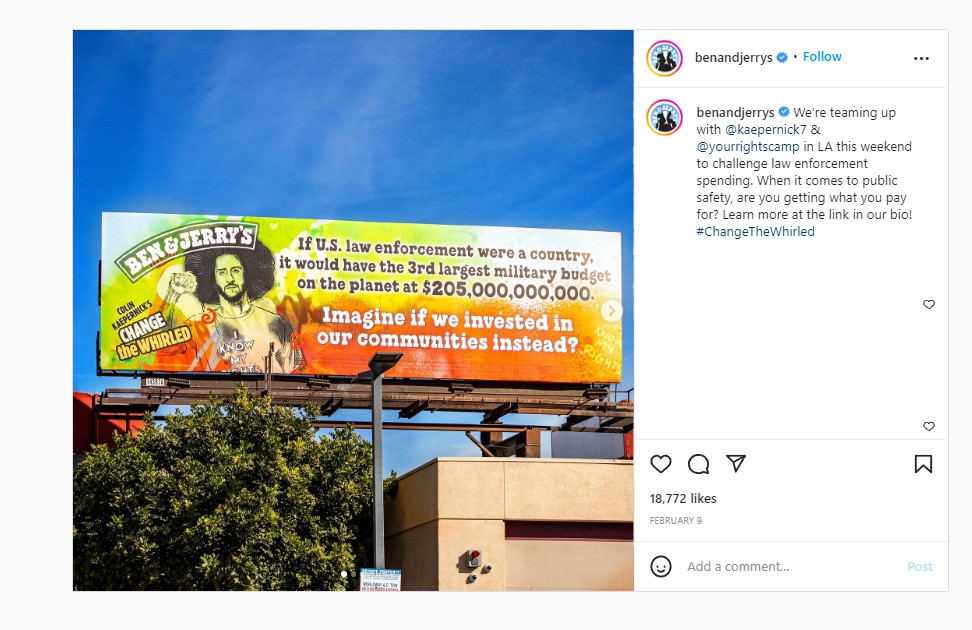 The public responded positively to Benn n Jerry’s partnership announcement on Instagram. The post got over 18,700 likes and 471 comments, most of which were quite supportive, saying things like – “Great message and one of the best flavors”, “Excellent campaign. Keep it up”, “Getting some ice cream tomorrow to support more of this” to cite a few.

To raise awareness of the Know Your Rights campaign, the ice cream brand’s representatives and people from the Your Rights Camp distributed over 2,000 meals, Change the Whirled pints, and gift certificates worth $10,000 in Tampa, where 23.6% of Black or African American people live. They also rented a billboard in Tampa (that cost around $3,500) right before Super Bowl 55.

Little Moons were giving away free frozen treats, tote bags, cinema tickets, and umbrellas to passers-by at the Whitfield Garden on a hot June 14. Generous Little Moons’ staff was actually handing these out through the holes of a super-cute, eye-catching pastel billboard featuring the brand itself. Little Moons’ fans started queuing in front of it early in the morning, which drew even more attention to the site and lured in other people that didn’t know about the brand earlier (but now they certainly do).

Being aware of the fact that Instagram pushes video content on their platform, Little Moons published this super-sweet vid that got 2,149 views. One of the comments under the Reel says “Tried the pistachio ones today — my new favorite treat”. The campaign was well-received among the Brits but also among content marketing moguls, which can be told by social media posts that can be found by searching for the Little Moons’ branded hashtag, #littlemoons.

Magnum is constantly pushing the boundaries and experimenting with both proven and new marketing channels and methods. In order to promote the new MAGNUM REMIX, they partnered with Kylie Minogue and Peggy Pou. This pop star and DJ/producer iconic duo debuted a captivating new track that was put before the public in Cannes.

The MAGNUM REMIX featured in the video introduced the rich twice-dipped ice cream in 3 yummy flavours. The brand also presented two exclusive flavours – the Kylie and Peggy Remix, sprinkled in cocoa velvet spray and mesmerizing colours. The Drum, a popular marketing platform, spoke about Magnum x Kylie Minogue x Peggy Gou collab in the section “Ad Of The day” giving both Magnum and “Can’t Get You Out of My Head” even more publicity, alongside CreamMagazine, Shots.net, and Socialpost to list a few. 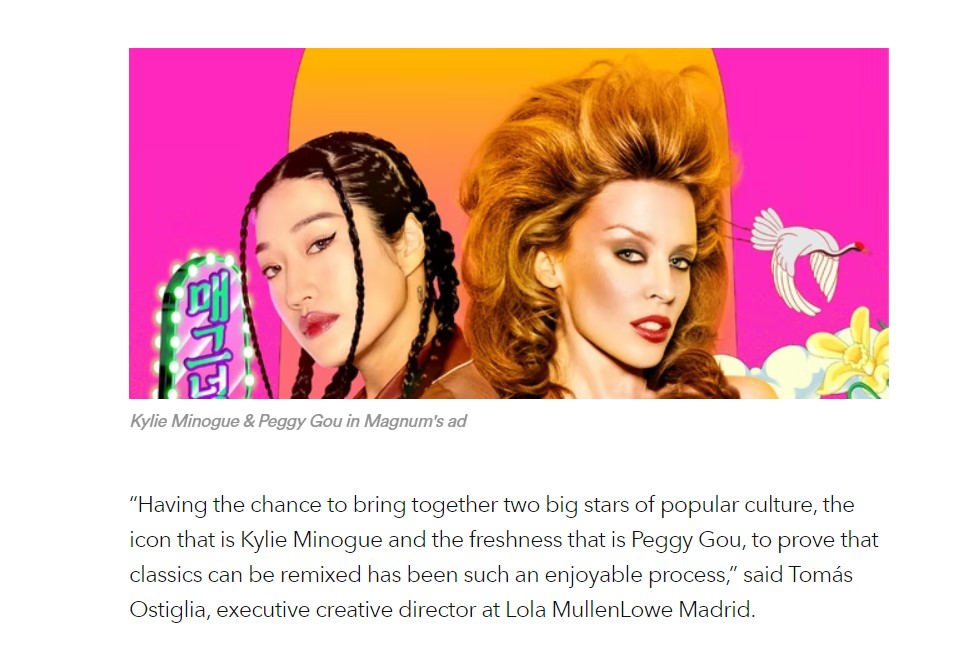 Magnum posted a Short on their official YouTube account, announcing the release. The video got 6,400 views and 223 likes. 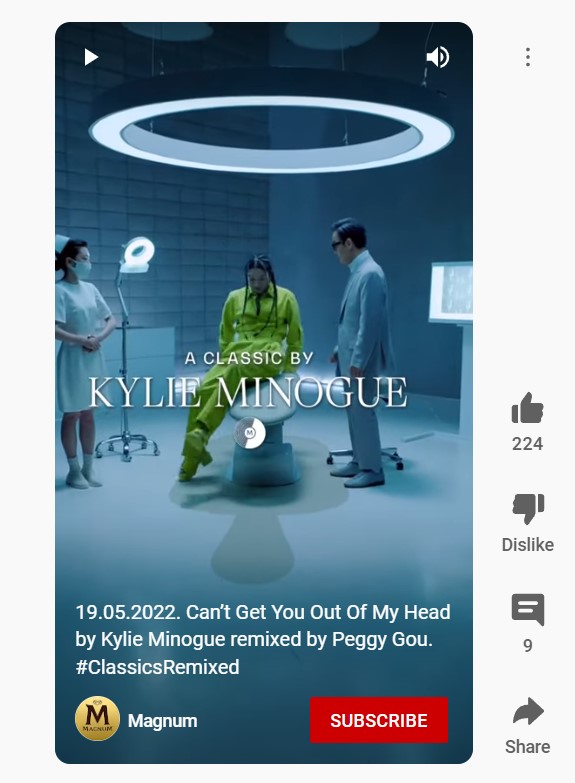 Why We Love it

Launched just over a month ago, the Häagen-Dazs’ Ice Cream of Ice Creams campaign has already started driving a new wave of excitement around this luxury ice cream brand. Häagen-Dazs has it all – superior taste, sophisticated craftsmanship, iconic identity. Yet, this time, they wanted to take a different approach and show their playful side as well.

An entire series of digital shorts is promoted on social media and via TV and video-on-demand advertising platforms (Channel 4, ITV, and Sky) while the brand also partnered with numerous macro and micro influencers to boost the campaign around the UK. 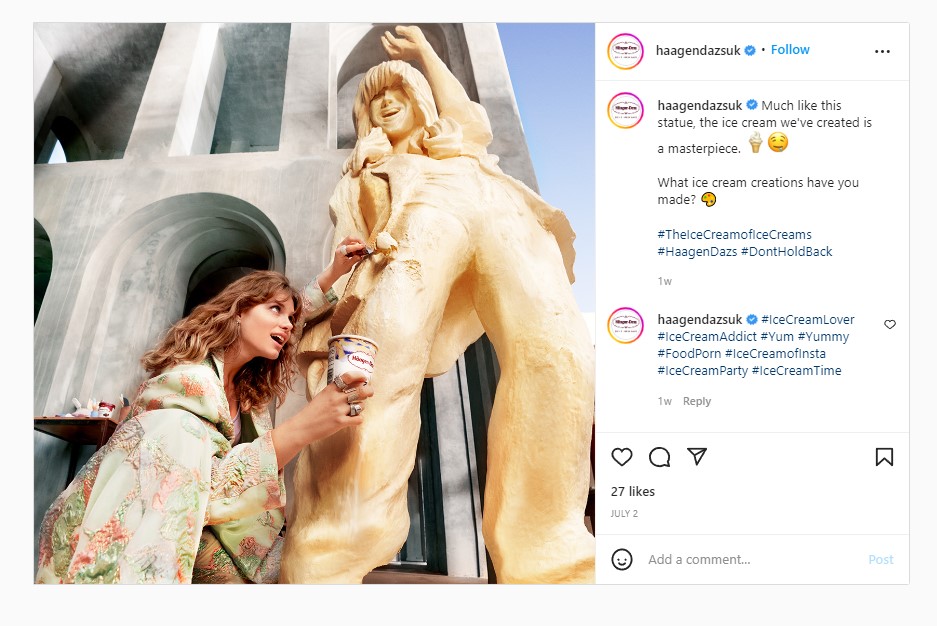 Häagen-Dazs also posted two videos on Facebook – one that showcases ice cream packaging and flavours consumers can choose from, and the other one that displays a female artist making an ice cream sculpture of herself (this one got almost 3 times more views because interactive, inspirational, and funny content is far more likely to drive engagement than generic, product-showcasing types of posts). 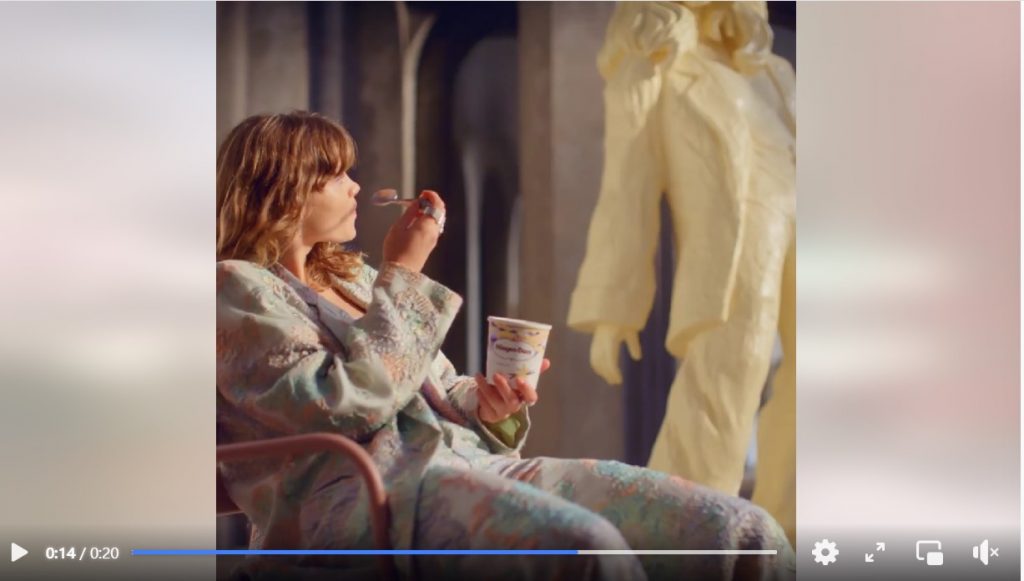 Last year, Connoisseur announced a massive partnership with Spark Foundry, Leo Burnett, and artisan chocolatier Koko Black and launched a multi-channel campaign to call attention to their premium stick ice cream. This gourmet brand gave away 150,000 of Classic Vanilla and Honeycomb (two new flavours) to 1) boost brand awareness, 2) elevate the ice cream tasting experience, and 3) surprise consumers in a unique way. They were actually delivering ice cream door-to-door around the most populated areas on the Australian eastern seaboard from the beginning of the summer (great timing, right?) to the end of the last year.

Connoisseur re-shared a bunch of Instagram stories they’ve been tagged on to drive their follower’s attention to their gourmet ice creams. People all around the world, although most of them from Australia, posted about how much they loved the taste of the new ice cream, while some used the Connoisseur’s branded hashtag for this campaign, #ThrillYourSenses as well.

Why We Love it

Here, at Contentworks, we love to dig into different campaigns and talk about all things marketing. Let’s have a chat if you think there’s another one we should immerse ourselves in! In the meantime, Happy Ice Cream Month! Tweet us your favourite @_contentworks. Enjoyed reading Our Scoop of The Coolest Ice Cream Marketing go ahead and hit share!

Loading...
Contentworks > The Content Bar > Lifestyle > Our Scoop of The Coolest Ice Cream Marketing
« iFX EXPO Asia 2022 to be Held in Bangkok for the First Time
Helping Your Clients Achieve Financial Literacy »