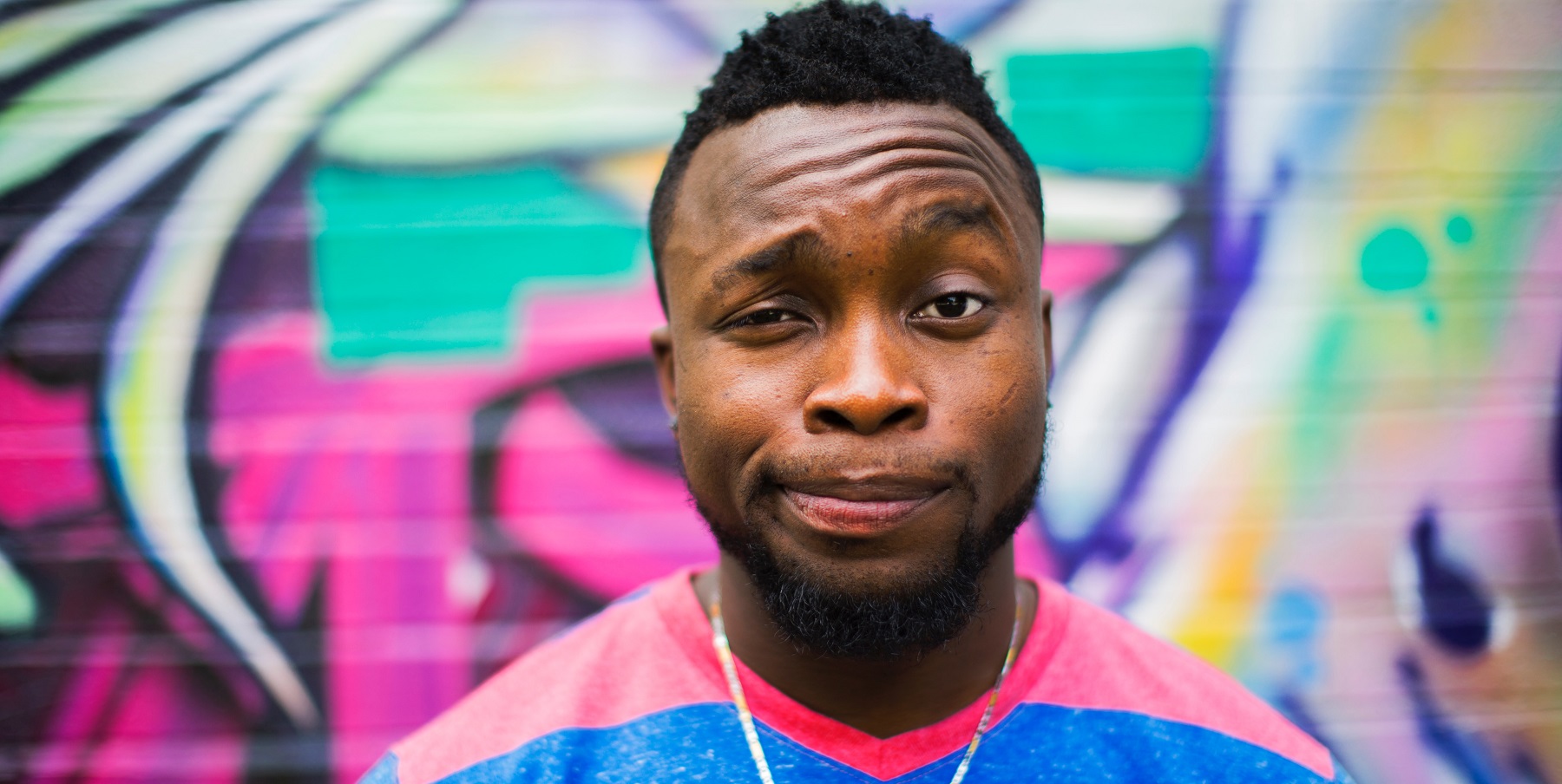 There are great marketing campaigns. Then there are those that make you want to hide behind a cushion. Creatives sometimes get so lost in their vision that they fail to see the glaring errors that the rest of us spot instantly. As the year comes to a close, we’re checking out the cringiest marketing fails of 2021!

John Lewis is usually pretty good at whipping out some advertising corkers. But it all went wrong when their home content insurance ad was pulled back in October. The ‘Let Life Happen’ advert, which featured a young boy in a dress making a mess throughout his house, was found to be ‘potentially misleading’ by the Financial Conduct Authority (FCA). This is because accidental damage cover is only available as an add-on to John Lewis’ new home content insurance product and only covers accidental (not deliberate) damage. 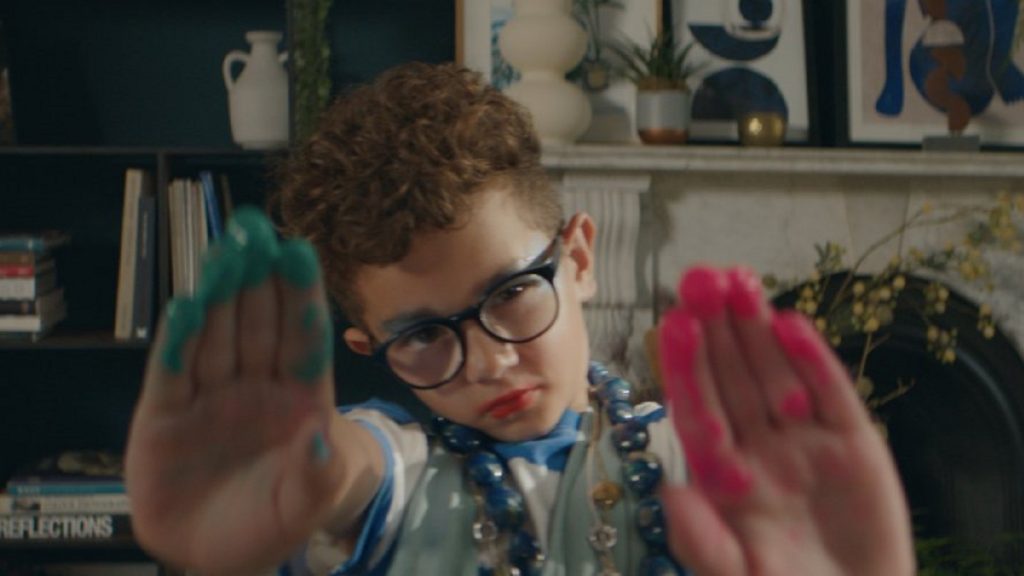 But let’s give the high-end department store a tiny bit of credit here. They did issue a statement about their new home insurance campaign on social media. While there was no outright apology, they did confirm it was ‘not their intention’ to mislead clients and gave an explanation for the script. They also agreed to contact anyone who had bought home content insurance to clarify whether or not they were happy with their product.

In terms of damage maintenance, this wasn’t too bad. Remember, if you mess up it’s important to:

Top Tip: While it’s okay to stand up for what you believe in, your ideas need to be carefully thought out and presented to avoid comments like this. Savage. Remember your target audience and the kind of advert that would appeal to them. It’s unlikely that a John Lewis customer would not have appreciated the advert theme. 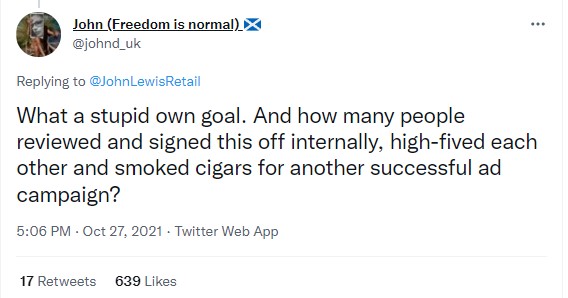 Burger King made a ‘whopper’ of an error when they tweeted: “Women belong in the kitchen” on International Women’s Day 2021. While the tweet was meant to give their cooking scholarship for female employees a humorous twist, it resulted in some flame-grilled rage on social media from people who didn’t appreciate the ‘sexist’ joke. The fast food chain was then forced to justify its tweet with follow-up posts, one of which read: “If they want to, of course. Yet only 20% of chefs are women. We’re on a mission to change the gender ratio.” Unfortunately for Burger King, many Twitter users couldn’t get past the first tweet which lead to a host of negative PR.

So, how did Burger King recover?  Well, they issued an apology, which was most definitely needed in this situation even if they made a genuine mistake. They also deleted the initial tweet claiming, ‘there were abusive comments in the thread’ and they ‘didn’t want to leave the space open for that.’ Fair enough. But somewhat convenient.

Top Tip: If you plan to chime in on International Women’s Day, do think about your marketing messages and hone your sign-off process. Additionally, add some diversity to your decision making process to ensure your advert wasn’t approved by 10 x 50 year old straight, white,  male execs. It’s usually best to only join in the with events that are relevant to you. So if you’ve an equal rights policy at work or you work with an LGBTQ+ organisation, you might feel it’s important to support Pride. Don’t use trending hashtags and important issues to try and get more hits.

Cruelty free cosmetics brand Lush has announced that it is quitting social media until digital sites do a better job of protecting users from harmful content. The company will be completely switching off from Facebook, Instagram, TikTok and Snapchat.

This is all well and good on the surface. After all, it’s no secret that the online world can be a tricky place to navigate. The move also got them a whole load of media attention from top publications like The Guardian, which is in itself pretty awesome organic PR.

There is, however, a cringeworthy element to this whole bath bomb announcement. It’s happened before. In 2019, Lush announced they’d be taking a social media break as they were tired of fighting algorithms and were unwilling to pay for newsfeed real estate. The company switched off for nine-months prioritising its e-commerce site and the Lush Labs app. When the pandemic hit, however, the digital team saw little option but to return to social media once again. Lush even acknowledged their social yoyoing in a recent press release, stating:

“Like so many people have experienced before us, Lush has tried to come off social media, but our FOMO is vast, and our compulsion to use the various platforms means we find ourselves back on there, despite our best intentions.”

We wouldn’t ask our customers to meet us down a dark and dangerous alleyway, but some social media platforms are beginning to feel like places no one should be encouraged to go. Something has to change. We hope that platforms will introduce strong best practice guidelines, and we hope that international regulation will be passed into law. But we can’t wait. We feel forced to take our own action to shield our customers from the harm and manipulation they may experience whilst trying to connect with us on social media.

Lush promises to find new ways to connect, to build better channels of communication elsewhere, as well as use the older tried and tested routes. For now, they can still be found on Twitter, Pinterest, LinkedIn and YouTube.

Here’s the question. Is Lush trapped in a repetitive cycle of leaving and re-joining social media in a somewhat dramatic fashion, much like an attention-seeking tweeter who hyperbolically announces they’re deleting their social accounts and embarking on a period of self-discovery (only to return a few days later). Or do they mean it this time? If it’s the former, pass us the popcorn as this is just the trailer. If it’s the latter, then we wish them nothing but the best in their social media-less marketing strategy.

Top Tip: The initial PR buzz and accolade you get from leaving social media will be replaced with what? If you plan to abandon social media altogether you need to have another marketing plan. Will you go for Adwords? Or perhaps traditional PR, billboards or magazine ads.

Rainbow Capitalism, also known as Pinkwashing, is a term used to describe the commercialisation and commodification of LGBTQ+ movements, most notably Pride. Many brands have found themselves at the heart of cringeworthy campaigns that have been pulled apart by LGBTQ+ audiences who find them damaging to the community. The reality is that many of the corporations that proudly don rainbow symbols and pro-LGBTQ messaging exclusively during Pride either spend the entire year actively perpetuating the oppression, or worse still, donating large sums of money to anti-LGBTQ politicians. Corporations have a reputation for “ditching” LGBTQ people and causes after June, once doing so is no longer as profitable. 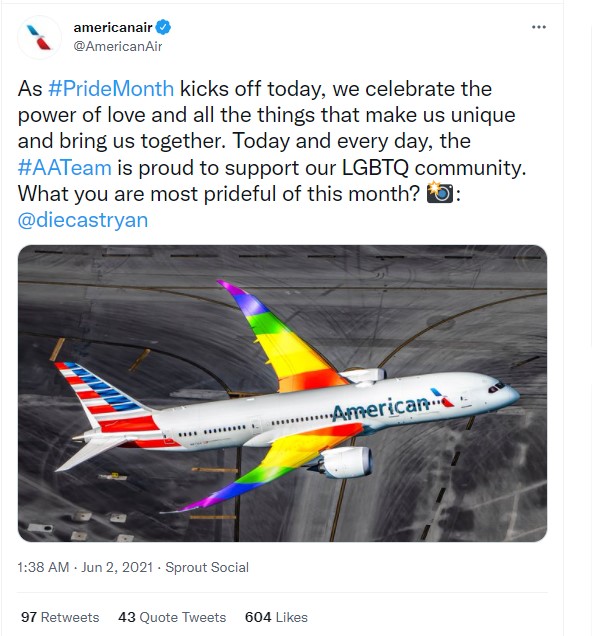 Victoria Secret was criticised for tweeting a Pride message despite refusing to hire transgender models back in 2019 and, more recently, American Airline’s flashy display of rainbow-washed cover banners was not enough to drown out the nearly $500,000 in campaign donations they made to anti-LGBTQ in 2020. OUCH! And today’s social media audience won’t let brands get away with this stuff either. American Airlines were hauled over hot coals on social media and rightly so. 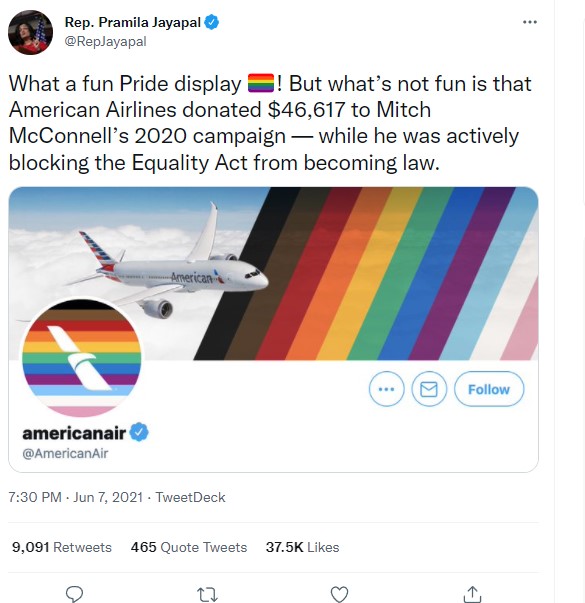 Top Tip: Brands need to examine their history and make a fresh start if they want to support initiatives like Pride. It’s way better to discuss the ‘elephant in the room’ than to carry on like nothing as happened. You can meet with LGBTQ+ representatives, learn more about their challenges, admit your mistakes and apologise for them. There’s always room for brand improvement but creating a rainbow logo isn’t it.

Financial services company, Robinhood, faced extreme backlash when it celebrated amateur investors in a Super Bowl ad amid a flurryof bad press. While the idea that anyone can be an investor has been at the centre of Robinhood’s branding since it was founded, controversial stock restrictions undermined the entire brand and made people extremely mad. 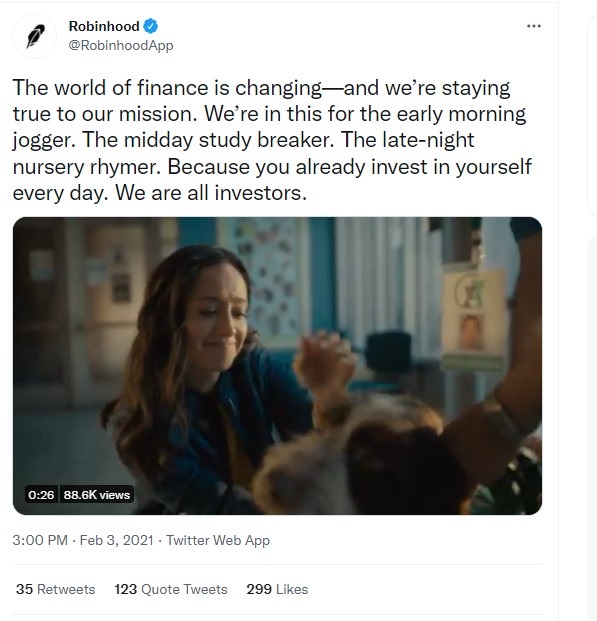 So why was the Super Bowl placement so badly received? Well, when it comes to marketing and taking up such a huge spot, it’s crucial not to be at the centre of a wild and untamed PR backlash. But unfortunately, this is what happened. Robinhood was being slated for temporarily banning small investors from buying stock in companies like GameStop, before placing restrictions on stocks associated with r/WallStreetBets – including GameStop, AMC and Nokia. The move angered thousands of Robinhood customers trying to buy stocks, and the company’s app got review-bombed on the Google Play Store.

Robinhood also faced dozens of lawsuits over the GameStop stock freeze and even Congress was called to investigate the Robinhood app. While Robinhood claims the restrictions were put in place due to clearinghouses suddenly requiring much higher deposits, many people suggested that the company limited the trading of GameStop shares ‘purposefully and knowingly to manipulate the market.’

The Super Bowl commercial touched a nerve with many because it didn’t address any of the controversy surrounding the brand, making it rather awkwardly timed. The Chief Marketing Officer, Christina Smedley, also brushed over the issues referring to the Super Bowl spot as ‘a great state for us to remind people about what we stand for and why the company was put into existence in the first place.’ To make matters even worse, Robinhood disabled commends on the YouTube version of the commercial in a typical ‘burying their head in the sand’ move. The Super Bowl ad posted to Twitter, however, saw negative responses with high-profile celebrities and other social media users criticising the brand. 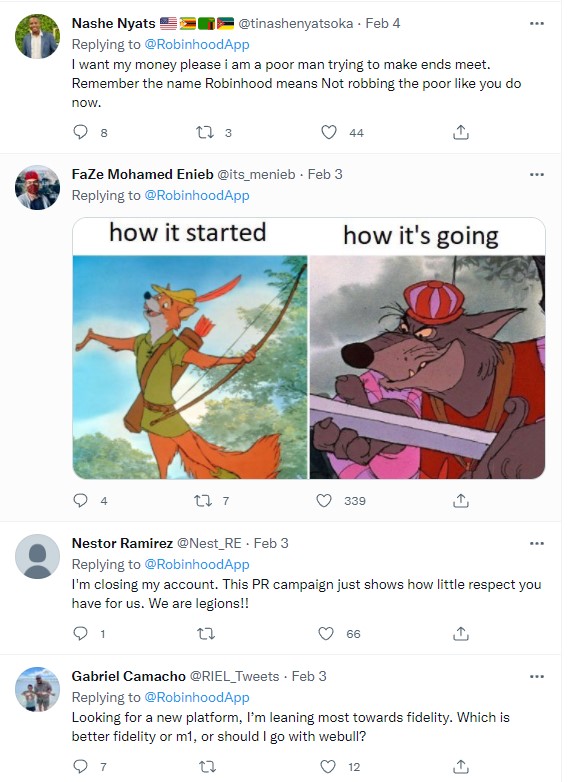 Top Tip: If negative PR starts to become uncontrolled, don’t shy away from the issue. It’s really important to address the problem head on, either with a statement, an apology or a PR explaining your decisions. Negative comments should not be deleted but managed. Try to direct people away from social media to private email if they have a specific query but acknowledge it publically.

If something does go wrong in your marketing strategy, it’s essential to have protocols in place so that your whole team know how to deal with a PR fallout. If you’re looking to improve your online reputation or fix some negative PR then contact Contentworks today. We’re ready to help you turn over a new page in 2022 with great content, video marketing, social media management and expert strategy. Loved reading Cringiest Marketing Fails of 2021? go ahead and hit share.