WSB Traders Aimed For Hedge Funds. They Hit Brokers Instead

If 2020 wasn’t crazy enough for financial markets, the first few weeks of this year have already proven that 2021 could be even more chaotic. A group of several hundred-thousand retail traders on Reddit banded together to create one of the biggest short squeezes in history. And while Wall Street hedge funds may have been their original target, brokers are the ones taking the real heat from traders and regulators alike. WSB traders aimed for hedge funds. They hit brokers instead. As a leading marketing agency for the financial sector, we’re taking a look.

That’s right: WallStreetBets traders tried to squeeze hedge funds on Wall Street (and they were successful, to a degree.) However, it was the brokers that hosted the traders who ended up under the most scrutiny. Companies like Robinhood, Webull, M1, and many others have faced heat from their users and regulators alike in the days and weeks that have followed WallStreetBets’ pump into Gamestop stock.

Let’s take a look at what happened: here’s everything you need to know about WallStreetBets’ Gamestop saga, and what happened to brokers as a result.

Here’s what went down

The WallStreetBets saga began in January, when a group of traders on the r/WallStreetBets (WSB) banded together for one purpose: to pump money into GameStop Inc. (NYSE:GME)

The group, which describes itself as “[if] 4chan found a Bloomberg terminal,” had been collectively picking “meme stocks” to pump money into for months. “Meme stocks” are stocks that are popular with millennial traders for reasons other than their fundamental value. GameStop was the perfect example of this: a failing company that a lot of millennials had strong, nostalgic feelings about.

Therefore, when Reddit user @delaneydi began arguing that GameStop was undervalued by the market, something interesting happened. It was only a few months the idea that r/WallStreetBets would take over GameStop went from a joke into something very serious. WSB traders noticed that GameStop may not have only been under-priced: it was also the target of a huge number of institutional short sellers. 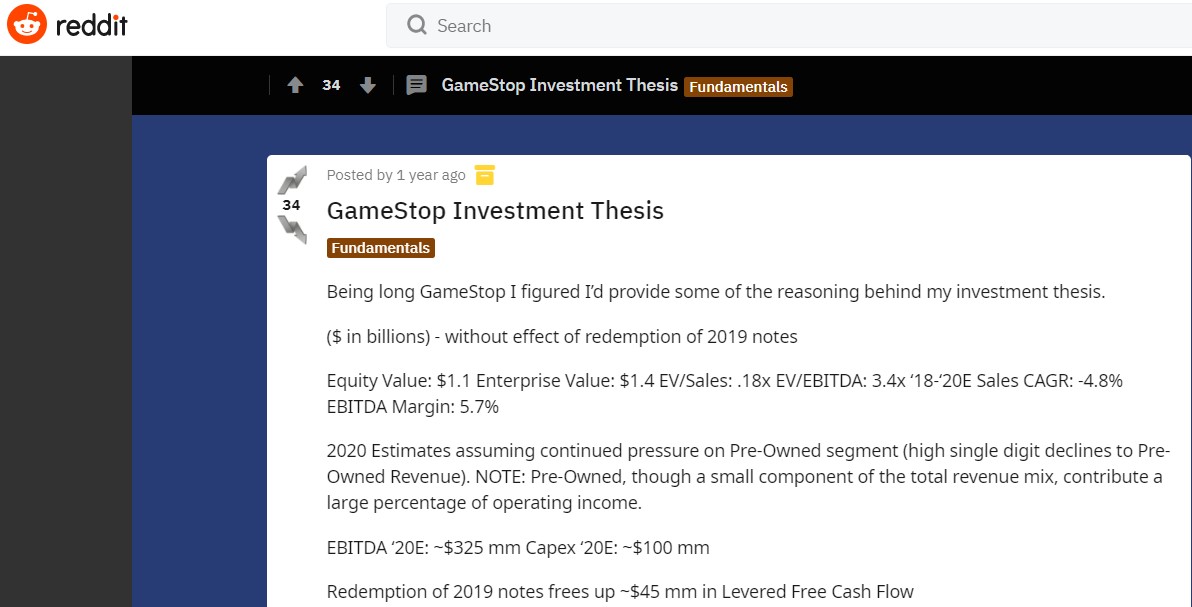 In other words, a number of Wall Street hedge funds were betting that the company’s stock value would continue to fall. Short selling is a practice where hedge funds borrow shares of a stock for a fee with the goal of selling them for a higher price. They then buy the stocks back at a lower price before returning them. However, as a short seller, you lose money if the stock’s price goes up. And, what’s worse, your losses are potentially infinite if the stock price never stops rallying.

And so the games began: the WSB traders set out to pump the price of GameStop. And while it may have been making profits at first, the pump quickly became a movement. The traders set out to “squeeze” the hedge funds that bet against GameStop and cause them to take huge losses. In at least one case, it worked: Melvin Capital lost 53 percent of its value in the month of January alone.

WSB traders aimed for hedge funds. They hit brokers instead.

It wasn’t long until the GameStop pump became an international media sensation. Everyone was talking about the “Big Short Squeeze.” But the conversation wasn’t just about the WSB traders and their shenanigans. Pretty soon, the media had its attention focused on stockbrokers–in particular, Robinhood.

The California-based commission-free stockbroker had become particularly popular with millennial traders for its user-friendly interface and fee-free retail trading service. But after the Big Short Squeeze began, Robinhood quickly became the subject of a much larger discussion about who makes the rules in stock markets. And who gets to play the game.

Why is this? Shortly after the WSB traders jumped into GameStop’s stocks en masse, Robinhood stopped allowing its retail users to buy shares of GME. Why did this happen? Because just like there’s no such thing as free lunch, there’s also no such thing as (truly) free stock trading.

Why did Robinhood restrict the trading of GameStop shares?

Just because the company wasn’t charging its retail users fees for trading stocks doesn’t mean that no one was paying for them. Instead, Robinhood’s commissions were paid by a number of big-time investors (for example, Citadel Securities) that got access to Robinhood’s market data in exchange.  This practice is called “payment for order flow”. 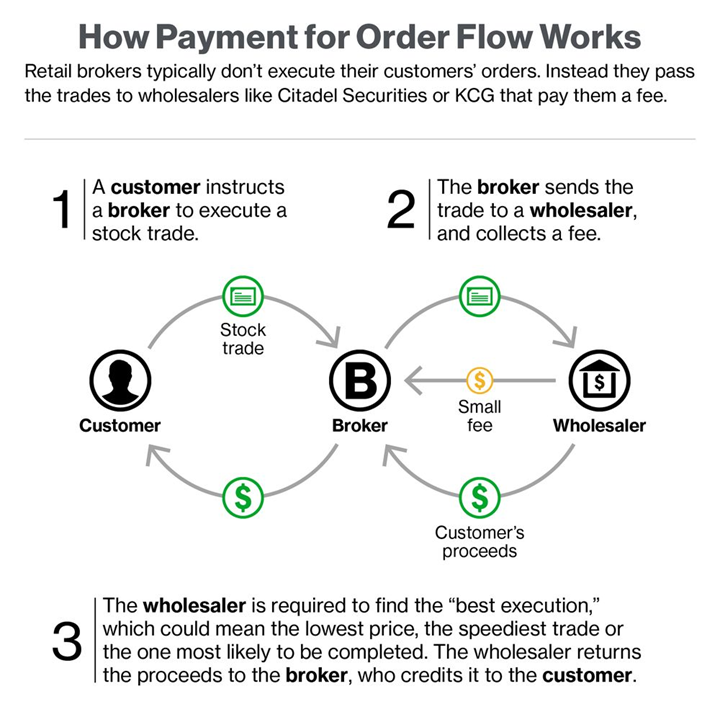 Payment for Order Flow, via Bloomberg

The Financial Times explained that in the “payment for order flow,” investors like Citadel Securities would make money off these retail orders by “automatically taking the other side of the order, then returning to the market to flip the trade. It pockets the difference between the price to buy and sell, known as the spread.”

Interestingly, however, when Robinhood shut down certain activities related to GME, a number of analysts pointed out that the company may have been attempting to save the GME holdings of the institutional investors who essentially fund its platform.

The company later stated that this wasn’t the case; that in fact, it had shut down trading in order to protect traders from “market volatility,” and because it was necessary to ensure it didn’t violate government regulations. The New York Times reported that Robinhood may have shut down trading because it literally couldn’t afford “to meet higher margin, or lending requirements from its central clearing facility for stock trades, known as the Depository Trust & Clearing Corporation.” 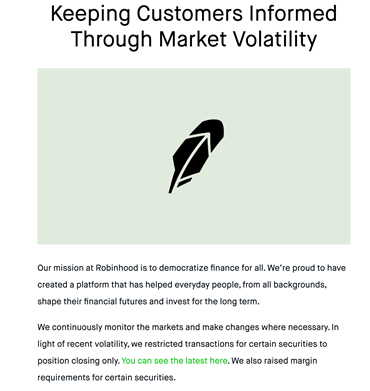 What does all this mean for brokers?

Contentworks Agency works with leading brokers so we know there have been ripples felt in this pond. In any case, the WSB saga has caused quite a bit of chaos for Robinhood and other brokers. A number of traders have filed class-action lawsuits against Robinhood. Hundreds of thousands of disgruntled users sent Robinhood’s rating on the Google Play store down to one star–not once, but twice. Other brokers that deal directly with retail traders, including Webull and M1, also faced backlash for restricting trades on GME and other “meme stocks.” 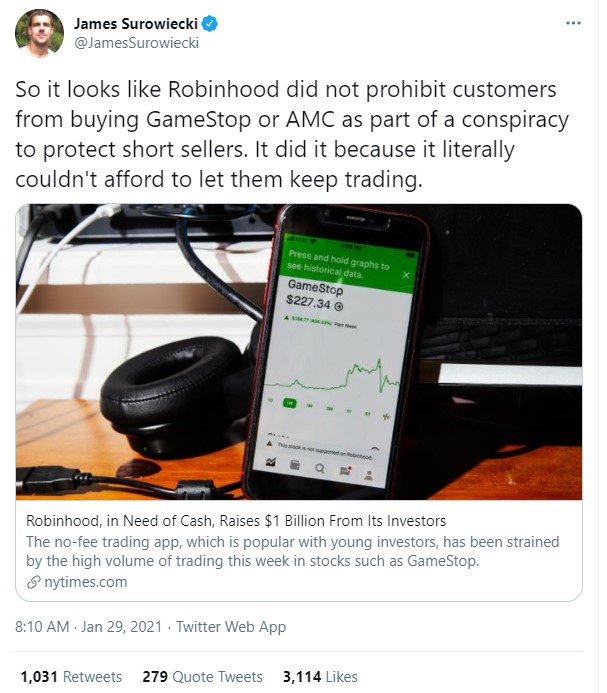 Some other firms placed limits on the numbers of new accounts that they are onboarding. For example, London-listed IG Group (LON:IGG) announced in early February that it would be suspending the opening of new accounts, citing technical issues over frenzy with some of the stocks associated with the WSB squeeze.

So far, no specific regulatory action has been taken against brokers that restricted retail trading activity in GME or any other “meme stock.”

However, the very moment that Robinhood made the decision to limit trading, regulators reared their heads. Lawmakers in the United States also took aim at Robinhood after it barred retail traders from GME and other stocks. For example, Representative Alexandria Ocasio Cortez (D-NY) and Senator Ted Cruz (R-TX) formed an odd couple on Twitter when both condemned Robinhood’s decisions just hours after the trading ban went into effect. 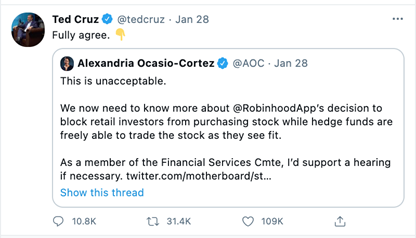 As such, the chief executive of Robinhood is expected to testify before Congress alongside the CEOs of  Melvin Capital, Citadel, Reddit, and one ‘Roaring Kitty’ (also known as Keith Patrick Gill), a Youtuber and Reddit user who is largely credited with driving the hype behind the GameStop rally.

What does this mean for markets? 3 key takeaways

While the WallStreetBets saga is still unfolding, analysts agree that it will have lasting effects. In addition to whatever comes after the hearing, here are the most important consequences that the Big Short Squeeze is slated to have:

As you can see, while the WallStreetBets GameStop saga only began a few weeks ago, the tale is far from over. If you liked reading about the WSB-GameStop epic, you’ll love the other posts in our Content Bar or over on Medium. (And while you’re at it, smash that share button!) If you’re looking for great financial services content, speak to the Contentworks Agency team. We work with leading banks, brokers, hedge funds and fintechs to deliver compliant content.