In today’s connected and technology-advanced world, reputation matters. That’s why if you face a public relations crisis, it’s essential to get things back under control as quickly as possible to avoid further damage. This is particularly important within the financial services sector where trust is the most valued aspect of banking and reputation is one of the biggest draws to a challenger bank.

The slightest slip up in the PR department can have a devastating impact on business. So as a leading content marketing agency, we’ve compiled a host of crisis management tips should you be met with fast-spreading and often overwhelming online backlash.

Taking Control of Your Brand – Why It Matters!

To understand why taking control of your brand matters, particularly during a PR crisis, it’s important to look at the financial landscape as it stands, a little deeper.

To start with, trust in banks is failing. It was declining even before COVID-19, but the pandemic has made things worse. In fact, according to a recent Banking Consumer Study, just 29% of respondents trust their banks to look after their long-term financial wellbeing, compared with 43% two years ago. Throw a PR disaster which targets the authenticity or transparency of your organisation into the mix, and you’ll be battling a double-edged sword.

Recent reports show how 2020 made consumers more concerned about the cost of their bank accounts and debit or credit card services. This was true for 38% of consumers surveyed across six countries, rising to 56% of respondents in the US. This is relevant to all finance-related businesses including brokers or crypto providers, as being called out on social media for high fees could really tarnish your reputation. Unless you have a crisis management strategy in place.

The same multinational market survey also revealed that 34% of consumers reported they are now more conscious of security as a result of the pandemic. So, again, managing your reputation and monitoring comments around security is crucial to avoid consumer red flags.

The finance sector is heavily governed by industry overlords. So, as well as maintaining consumer-brand relationships to avoid negative PR, it’s also important to take compliance seriously. Take your eye off the ball and you could end up in regulatory hot water. That’s a very expensive apology with long lasting negative consequences. 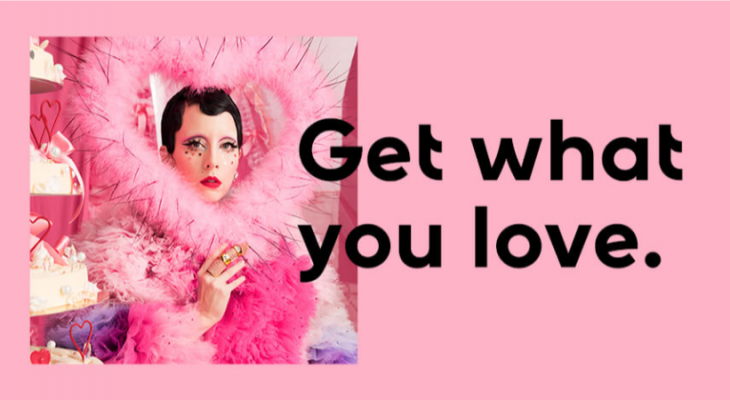 The posts were made by ‘influencers, who had been paid by Klarna to promote the service. They presented buying beauty or clothing items as ways of ‘lifting’ or ‘boosting’ your mood during the UK lockdown, and featured prominent references to Klarna. ASA ruled that all four must not appear again in their current form. In addition, future ads “must not irresponsibly encourage the use of Klarna’s deferred payment service, particularly by linking it with lifting or boosting mood.”

This is what was posted:

This led to a much-needed Klarna apology with a spokesman stating:

“During 2020, the single largest marketing investment we made was in KlarnaSense, a campaign to address impulse shopping. In that context, we thought long and hard about the text of the posts which were subsequently investigated by the ASA. It was a genuine attempt to recognise the mood of many of our consumers at the start of the first lockdown. We recognise that, whilst we had the best of intentions, we missed the mark with the four posts the ASA has looked into.

“Whilst we always adhere to all available ‘influencer’ guidelines and are compliant in terms of partnership signposting, we support more clarity in this space, and we believe some leadership on this is required. We are setting up an ‘influencer thought-leader council’ consisting of media owners, consumers, wellness charity partner[s] and influencers with the intention of providing better guidance for all brands in this space and in doing so support and engage with the ASA on this topic.”

PR Crisis Management Top Tip: Formal apologies, whether on social media, your website or both are a good starting point during a PR disaster as they show you’re accepting responsibility for what happened and aren’t afraid to address the issue head. Keep your apology as upbeat as possible and explain your actions with transparency.

If you find your finance brand is facing a PR backlash, here are some more tips on how to deal with the situation calmly and professionally.

You can’t expect every decision you make to go down well. In fact, a change to your services may cause a PR frenzy. So it’s all about how you handle the situation. Formulating personal replies explaining your business moves can put minds at ease. Addressing people directly on social media also gives you the opportunity to explain your position properly.  Social media users have the tendency to bounce off one another and even spread untruths, so it can be beneficial to speak up.

This is exactly what Barclays did when they faced social media criticism for slashing credit card limits by as much as 99%. Many people took to platforms such as Twitter to voice their disgust.

Noting the discontentment, Barclays jumped in to apologise and explain their decision which was ultimately to become a ‘more responsible lender.’ Barclays was sure to create a detailed personal reply which included complaint help links and credit limit assessment information, which served to guide the user in a more positive direction. 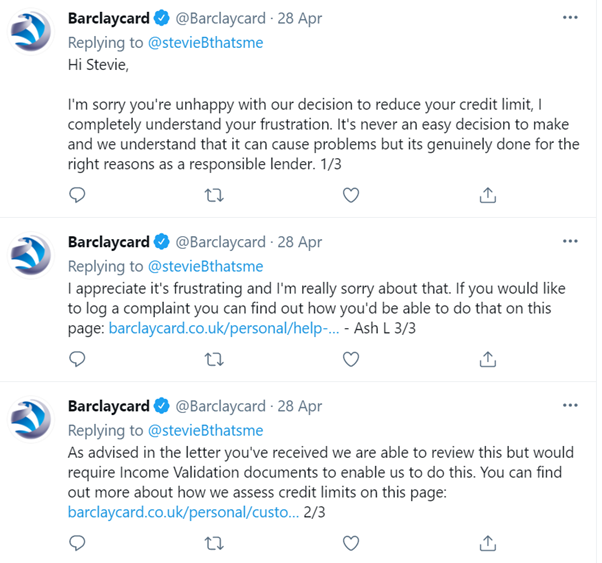 Don’t – Be Confrontational or Argumentative

There’s a time and place for humour. When someone is unhappy, it’s unwise to crack jokes. Similarly, if you’re being bombarded with complaints, avoid being confrontational or argumentative as this will simply feed the beast and encourage negative comments. The more you reply to people online, the more attention your crisis is likely to get on social media too, so try and handle things in a calm and professional manner.

Did you know: One in three (37%) of consumers are likely to unfollow a brand that handles an incident poorly and one in four (25%) are likely to actively post something critical in response. Therefore a mishandled incident can lead to a tidal wave of negativity or a reduction in followers, neither of which is desirable.

Social media monitoring is the act of monitoring social media for information relevant to your business. For example, you might want to know about brand mentions with or without direct tagging (aka @mention), relevant hashtags, mentions of your competitors and general trends that apply to your industry. While social media monitoring is about gathering data and looking at what’s already happened, social listening is a more active and strategic allowing you to track, analyse and respond to conversations about your brand on social sites.

Knowing what’s being said about you on various channels will allow you to step in where needed and share valuable information and insights with consumers if you sniff negative PR. Remember, the more hands-on and responsive you are, the better. People may simply have the wrong end of the stick or be basing their opinions on distorted facts.

There are many social listening tools at your disposable offered by companies such as Agorapulse, TweetDeck and Brandwatch, so there’s absolutely no excuse to be out of the loop. Monitoring comments and conversations will help you get a feel for public sentiment. This can prove particularly useful around a new product or service launch.

Negative comments on social media can seem like a real blow to your business, particularly if you’re a small company trying to make ends meet. But authenticity is everything, so it’s really important not to delete comments as people might have already taken a screenshot of their engagement with you and use this to criticise you at a later date. It’s a tough world out there.

Social media comments do matter. According to a recent survey, nearly three-quarters of respondents read the comments on the social media ads they come across on their news feeds. More than half of respondents also said they’re less likely to make a brand purchase after they see negative comments about that brand online.

That said, more than half say they’ve noticed an increase in derogatory, offensive or hurtful comments in those ads. Trolling isn’t new and is unfortunately part of every online space. Consumers are aware of this and may empathise with your brand. Trolls can also overshadow customers with a reasonable complaint. So, rather than deleting comments that don’t suit your business agenda, it’s worth taking the time to sift through comment worth replying to and ignoring what is likely to be someone getting a thrill from trolling.

Do – Delete Your Own Comments Where Necessary

There is a slight caveat to the don’t delete comments policy. If you’ve said something that’s not accurate, politically correct or has caused a social media frenzy, deleting your original post may be appropriate so long as you follow it up correctly.

When Chase Bank tweeted a #MondayMotivation post considered to be ‘poor shaming,’ the brand quickly deleted and thanked the Twitter world for calling them out. 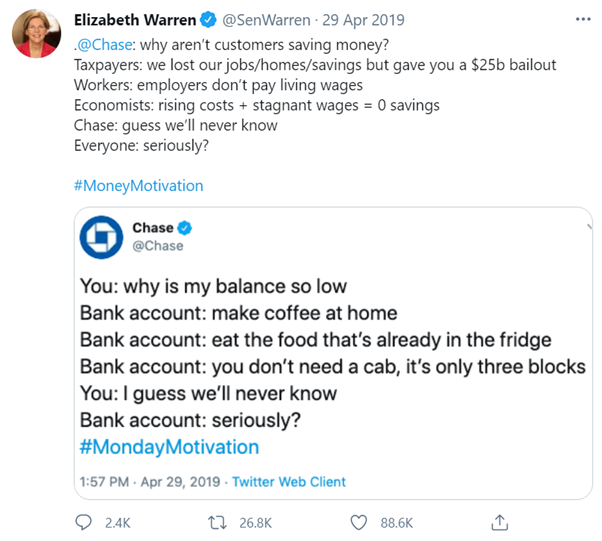 Here’s an example of the tweet and one of the replies:

Other’s took aim at Jamie Dimon, CEO of JPMorgan Chase. “It’s well-known that Jamie Dimon earned his riches making coffee at home and eating leftovers,” tweeted Ben Walsh, a reporter at Barron’s. JPMorgan’s board had recently raised Dimon’s salary to more than $31 million, according to filings with the Securities and Exchange Commission.

Chase deleted the tweet and replaced it with this:

Top Tip: Act swiftly and acknowledge when you’ve messed up. No-one is perfect but if you feel that you could have done things better, say so.

Do – Have an Action Plan 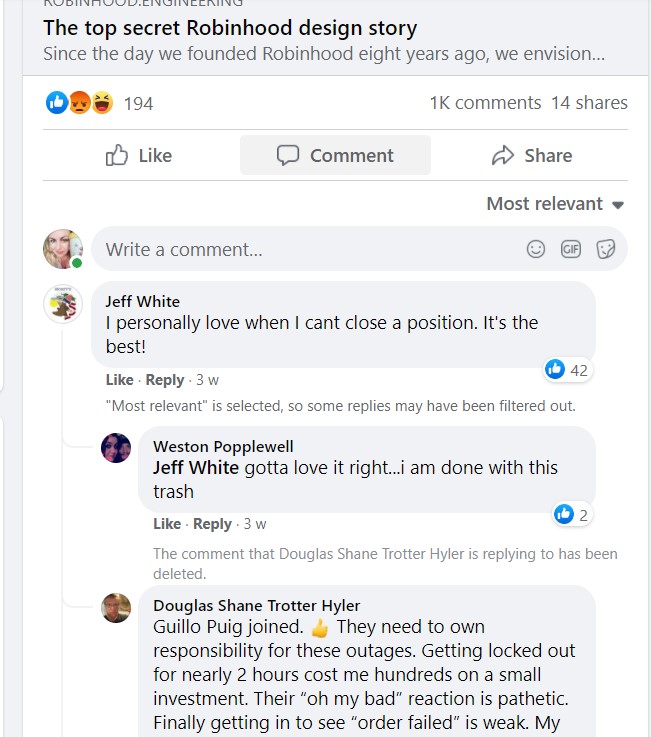 When it comes to a PR disaster action plan, think about the following:

Loading...
Contentworks > The Content Bar > Finance > PR Crisis Management for Financial Services
« Backstage at the iFX EXPO Dubai with Ultimate Fintech and Contentworks
Should My Brand Be on Pinterest? [2021 Update] »