Before looking ahead to the future, it’s important to understand and recap the events of recent months. 2019 was a relatively successful year for the world markets. In the United States, the Dow, S&P 500, and Nasdaq rose by 31%, 24%, and 19% respectively. In Europe, the DAX, FTSE, and Stoxx gained by 23%, 7%, and 22% respectively. The same trend happened in Asian markets. Meanwhile, year on year 2019 was successful for cryptocurrencies. Bitcoin rose by 85% while Litecoin rose by 25%. Although for latecomers to the crypto scene, the year may have appeared disappointing.

These gains happened during an eventful year. The Fed, which made four rate hikes in 2018, changed tune and implemented three rate cuts in 2019. The US-China trade war escalated and another trade war, between Japan and South Korea, emerged. 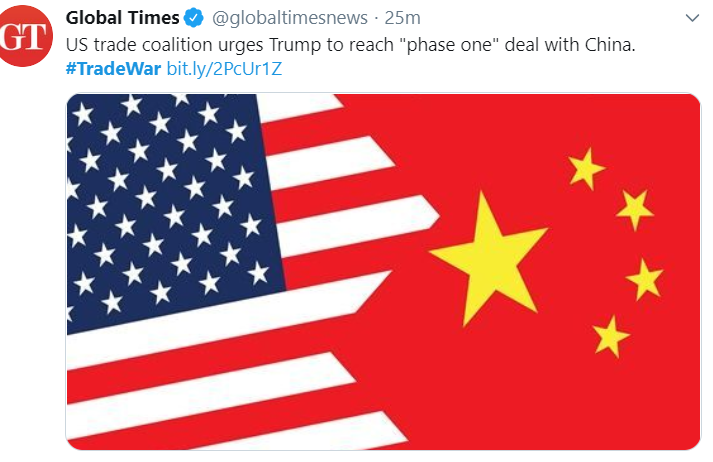 The market also continued to deal with ongoing Brexit negotiations. Constant exchanges between the UK Parliament and the EU moved markets with resignations, disagreements between party leaders and the media all having an impact. Market volatility was also boosted by the UK election with the British pound surging by 2.3% against the US dollar after polls revealed a Conservative majority. The pound also jumped to a three-and-a-half-year high against the Euro. The FTSE 100 share index rose 1.5%, while the FTSE 250 leapt 4%, hitting record highs. 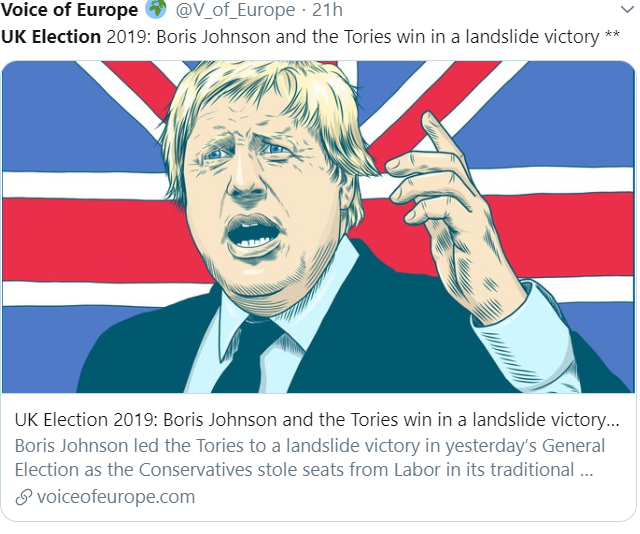 Looking ahead to 2020, there will be plenty of market moving events to watch. Here’s a rundown of some of the most significant 2020 financial calendar dates:

US voters will head to the polls on November 2, 2020. This will be an important event to watch, with Donald Trump already warning that a “vote for any Democrat in 2020 is a vote for the rise of radical socialism and the destruction of the American dream.” Indeed, his re-election campaign has been ongoing since he entered the White House, with no other US candidate in recent history raising and spending so much in the first two years in office. This is shown by the below Wall Street Journal chart. 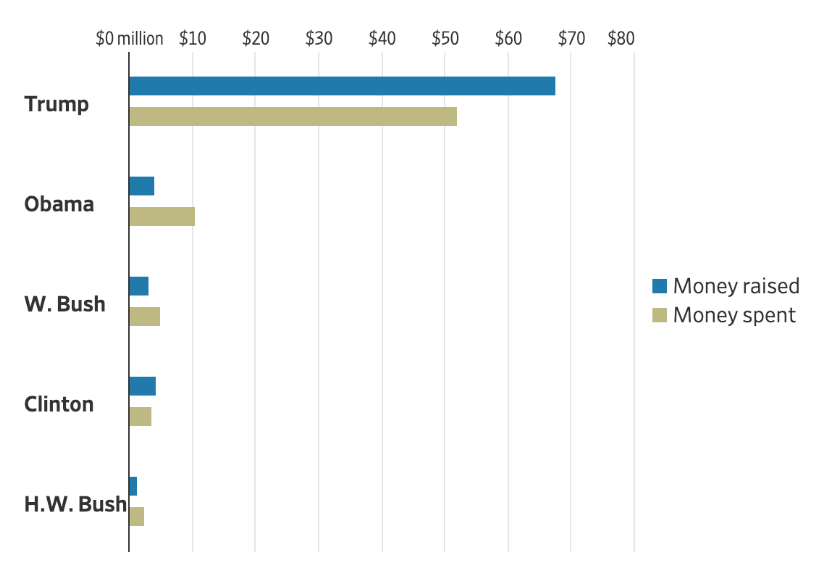 In the meantime, Democrats are following radical proposals. The frontrunners have embraced policies like tax hikes and sweeping healthcare reforms such as Medicare for all. They want dramatic action on climate change and immigration reform as well as controversial laws to address gun crime, policies for which are gaining extensive media attention.

While it’s important to bookmark the election in your 2020 financial calendar, you should also take note of March 10 and March 24, when the major primaries will take place. It is at these primaries that the market will have an idea of who will face Donald Trump.

The total Bitcoin supply is capped at 21 million coins. There are 18 million coins in circulation today. Bitcoin halving is a process that happens after every 210k blocks are reached. When this happens, the supply of Bitcoin is cut into half. This makes it very difficult for Bitcoin miners to get Bitcoins. The concept is similar to what happens in gold mining. The process becomes more difficult and complicated as miners dig deeper. The next Bitcoin halving will take place between May 14 and May 21. In the past, the price of Bitcoin and Litecoin soared ahead of halving. The last halving is expected to take place in 2140. It’s a while away but still in everyone’s financial calendar! 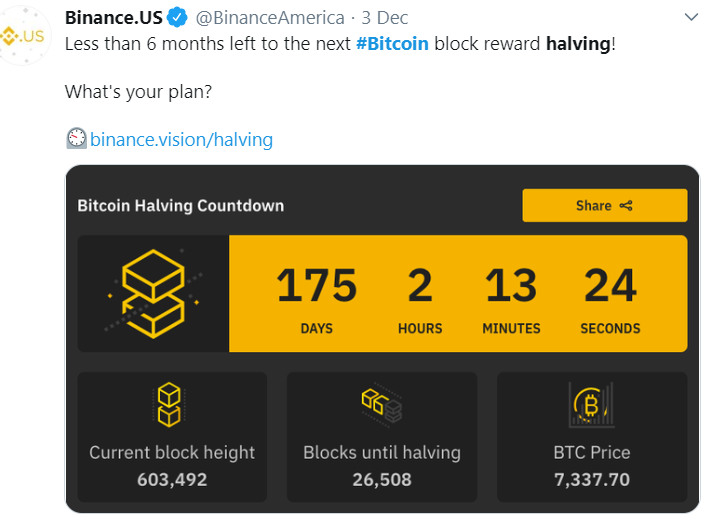 The Federal Reserve is the most important central bank in the world. This is simply because of the role of the dollar in the world market. So, it’s important to bookmark the dates of the meetings that will happen in 2020. The Fed releases a preliminary calendar on these meetings. The markets expect the Fed to hold rates at the current range of 1.75% and 2.0% in 2020. However, this could change, making these meetings essential to follow and add to your 2020 financial calendar. 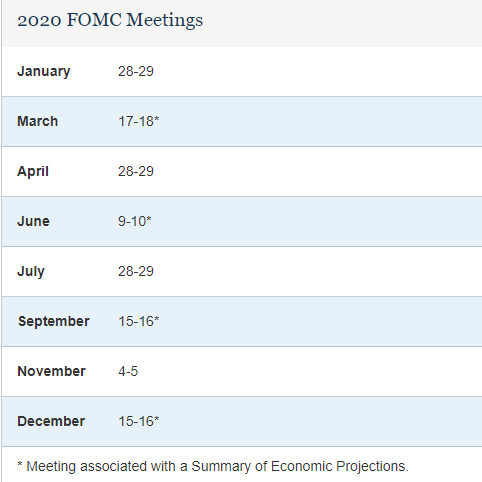 The European Central Bank (ECB) is the second-most important central bank in the world. This is because the European Union is the second-biggest economy in the world. The ECB meetings are usually watched very closely because of their role in the world’s economy. The ECB has published a tentative calendar for 2020 meetings. The meetings will take place on 23 January, 12 March, 30 April, June 4, July 16, August 29, and December 10. There will be other non-monetary policy meetings that you can follow on the ECB’s calendar here. If you’re a broker, get these dates in your calendar and plan activities around them.

Every year, Jackson Hole Wyoming hosts a summit of the leading central bank governors in the world. Other than central bank officials, the meeting is attended by academics, media, financial organisations, and government. The goal of the meeting, which is hosted by the Kansas City Fed, is to foster open discussion on the global economy. While a lot usually happens during these meetings, the markets pay close attention to speeches of leading central bankers. This year’s meeting will take place in August, although the date has not been confirmed.

Every January, the world elite gathers at a resort in Switzerland for the World Economic Forum. This is a meeting that is attended by key stakeholders in the world economy. In 2020, the meeting will take place on January 20 and end on January 24. As with the Jackson Hole summit, the meeting is watched because of the interviews and speeches that are made. These speeches tend to move the markets.

In December, OPEC leaders met in Vienna, where they deliberated on the need for supply cuts. The leaders managed to convince Russia to slash an additional 500k barrels of oil every day. These cuts will run until March 2020. OPEC+ leaders will meet for an unextraordinary meeting on March 5 and 6. In this meeting, the leaders will deliberate on whether additional cuts are needed. There will be another ordinary meeting that will take place in Vienna on June 9 and 10. Finally, a further meeting will take place in December.

There are other events that will take place in the coming year. First, Brexit will be watched closely. January 31 is a deadline that the UK was given by the European Union. Shortly afterwards, the UK and EU will start deliberating on the details. Boris Johnson has pledged to conduct a clean breakup by December 2020.

The market will continue to focus on the US and China trade relations. The hope is that a deal will be reached between the two parties that will be beneficial to both sides.

The US political environment will also be in focus. Democrats in Congress are expected to vote to impeach Donald Trump by the end of the year. This will lead to a Senate trial that will start in January. The market will be paying attention to that as well.