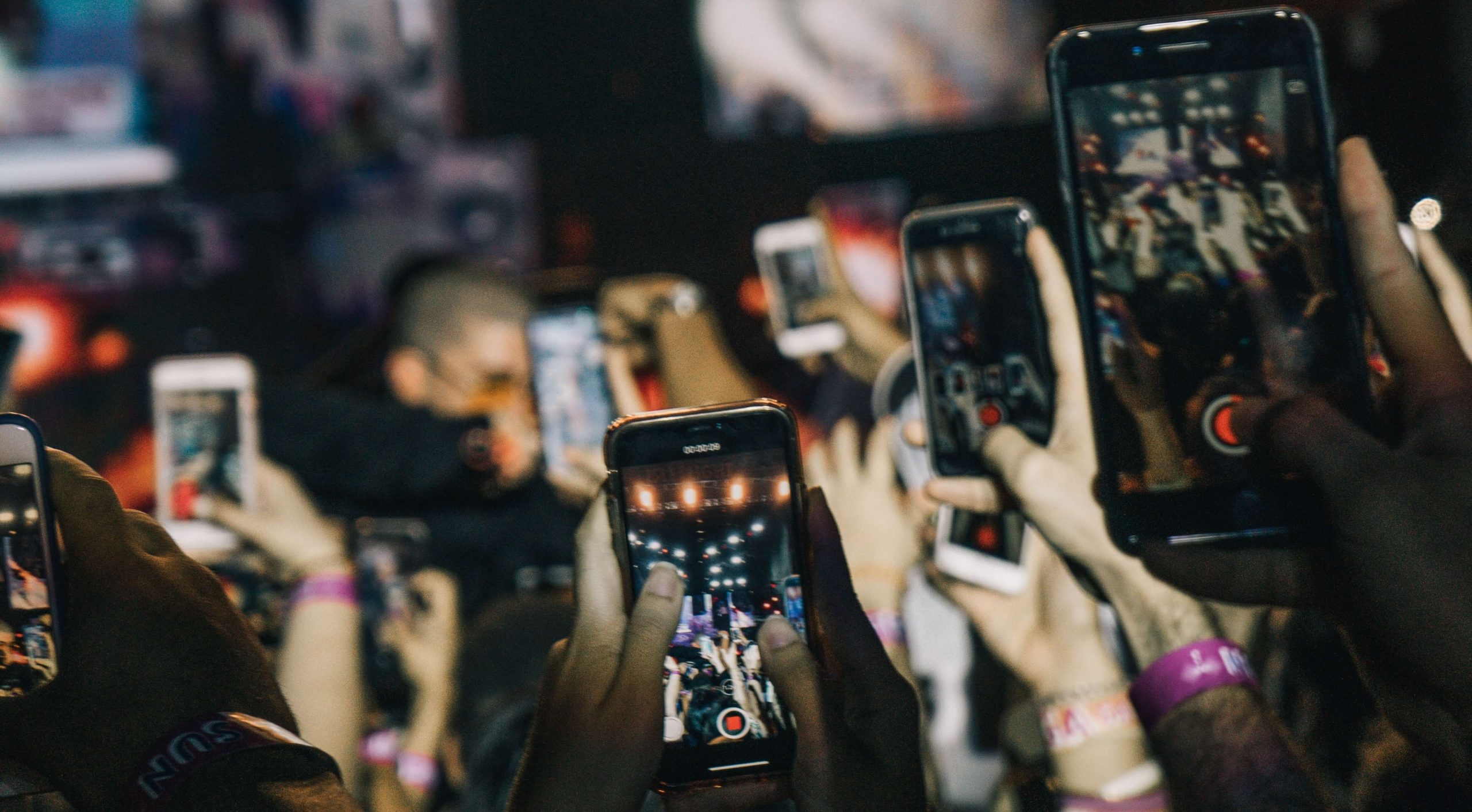 Wow, what a year! We’ve had to adapt like never before. And while some companies have pushed hard and made innovative digital moves, others have been thrust into the bad PR limelight. Tensions are high. People are willing to bite. So who has been hit by the curse of 2020 and what can you do if you find yourself being nipped at the ankles by an angry social media crowd? Join us as we check out the worst PR disasters of 2020.

Fashion Brand Oh Polly started off with a great idea. To host a competition for NHS frontline staff in light of the pandemic. The prize? To win a care pack and a new outfit to join in with a virtual cocktail party on Friday 24 April 2020. So sweet guys. But wait. Things quickly went south when winner Lara Harper, an NHS nurse from Glasgow, was told she couldn’t claim her prize because her 12-hour shift clashed with the virtual party. Oh Polly. Literally.

Despite numerous attempts to get the free care package and outfit she had won, Oh Polly refused to send out any part of her prize and instead invited the nurse to join in ‘future competitions.’ Annoyed (and rightly so), Lara took to Twitter to share her correspondence with the brand. You can read the full correspondence here. 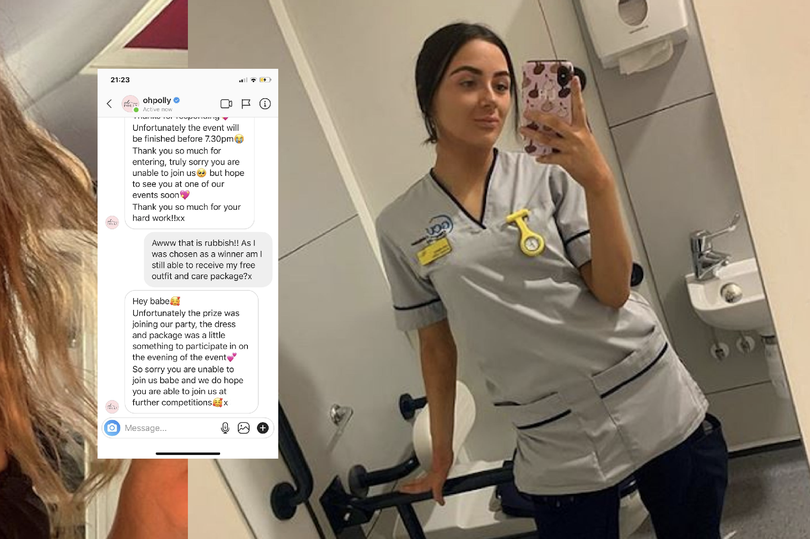 She also expressed her disappointment in a Pinned Tweet for maximum exposure of Oh Polly’s faux pax which has since received over 62.2thousand likes. 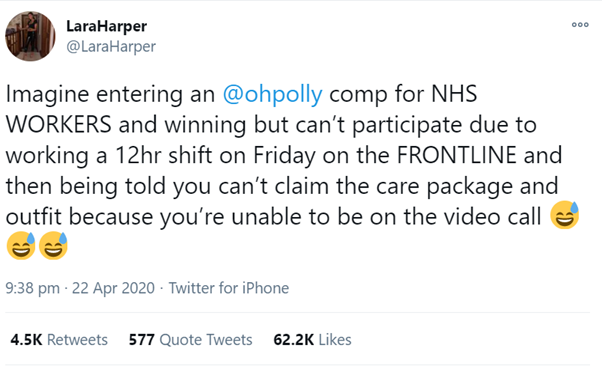 Why was this such a big mistake?

Well firstly it totally misread the mood of the nation. Nurses are working harder than ever and aren’t going to be available to party on a whim. Secondly, their response was rather emotionless and extremely dismissive. It had a ‘sorry you missed out but better luck next time’ kind of vibe.

So what happened next?

Having seen the growing resentment online at their decision not to reward Lara her prize, Oh Polly backtracked and sent out a public apology to the nurse. 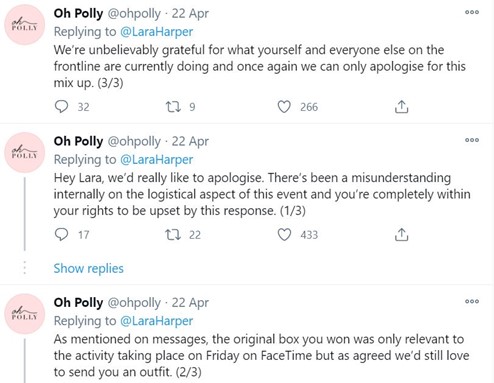 While this was a good start. Many people remained thoroughly unimpressed insisting Lara deserved a lot more than what was offered following Oh Polly’s unprofessionalism. 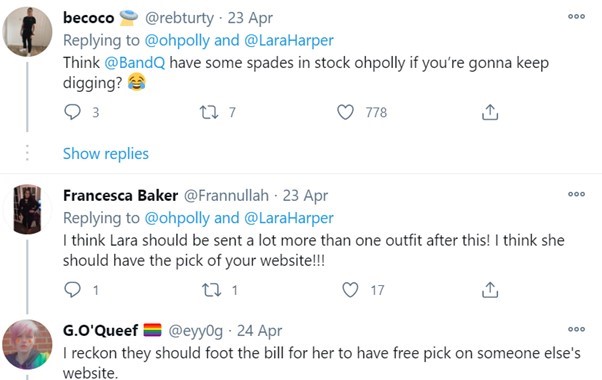 Takeaways to Avoid this PR Mistake!

Like any good business, persuasion, consistency and trust are needed if you’re in a position of power. While we don’t want to bang on about covid-19, it’s been one of the main talking points of the year with many governments making one PR disaster after the next. without going into the rights and wrongs of enforced lockdowns, the PR comms have been a disaster. The UK government really didn’t do themselves any favours when they launched their ‘Eat Out to Help Out’ campaign in a bid to revive the flailing food and drinks sector following the first national lockdown. 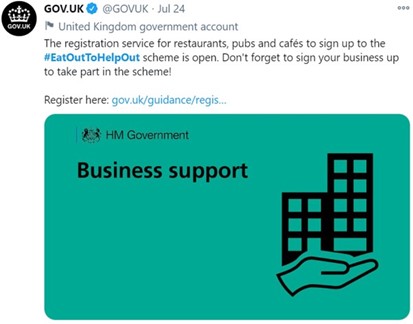 The campaign pledged to give diners a 50% discount on food and non-alcoholic drinks on Mondays, Tuesdays and Wednesdays throughout August in various restaurants and cafes including fast food chains like Ed’s Diner, KGC, Burger King and Pizza Hut. 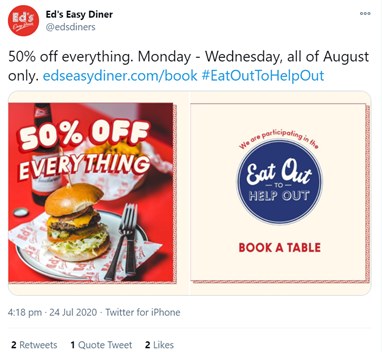 Seems fair enough right? But there were a few things amiss.

Firstly, the #EatOutToHelpOut drive directly contrasted with another government incentive – an anti-obesity campaign designed to slim down the British public in response to news that being fat can make covid symptoms worse. This means the public was effectively being told to lose weight AND consume fast food to revive the country – a move that didn’t go unnoticed. Nice one guys. 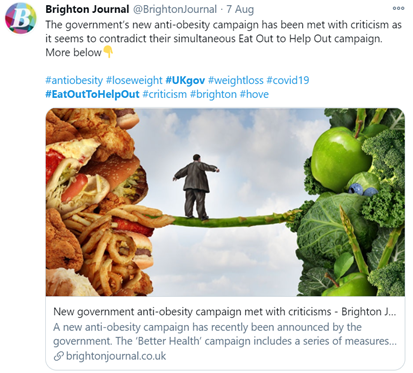 Secondly, it also didn’t help that the campaign was then blamed for 1 in 6 new Covid-19 cases and deemed responsible for triggering a second wave. As Eat Out to Help Out was a government scheme, this left a lot of people raging. 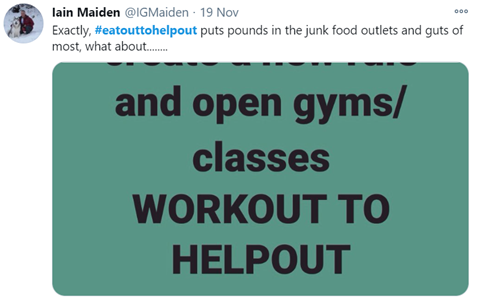 So What Happened Next?

And then they closed restaurants and pubs in a second national lockdown.

What Can We Learn from the Government’s Covid Response?

You really couldn’t make this up! Back in January, Burger King wanted to join the cool kids by launching a vegan burger to widen their audience and keep up with competitors such as McDonalds during Veganuary. But it didn’t go to plan. Burger King’s so-called vegan Rebel Whopper burger in fact wasn’t suitable for vegans at all as it was cooked on the same grill as all other meat burgers. And it wasn’t even served with vegan mayonnaise. Oh crikey.

While there was no deceit from Burger King and the message was loud and clear that the burger was cooked in Whopper juices, it didn’t go down well online. 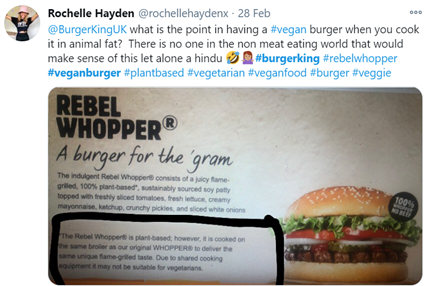 Well, Katie Evens, marketing director for the chain, said the burger was aimed at ‘flexitarians’ in a bid to justify Burger King’s decision. The idea was to reduce meat consumption while replicating the ‘flame-grilled taste’ as closely as possible.

Sam Calvert, head of communications at the Vegan Society, said that not making the new burger fully vegan “seems a missed opportunity.” She added that vegan mayonnaise was “readily available” and used by other well-known chains, which would also make the burger suitable for some religious groups that avoid eating certain animals and eggs.

What Can We Learn From this PR Mistake?

Customers love a bargain and an offer. So when McDonald’s announced that consumers could get a free breakfast McMuffin if they visited participating restaurants before 11am, it was happy days all-round. Unfortunately for the fast-food giant, a technical glitch caused their app to crash meaning people were unable to claim their free brekky. HANGRY!

In true 2020 style, raging consumers took to Twitter to brand the offer a ‘waste of time’ and ‘disappointing.’

All said and done, McDonald’s has since worked hard to fix technical glitches. And during the lockdown, went the extra mile to make people smile by sharing their Sausage and Egg McMuffin recipe in a response to the #JustLikeMcDonalds hashtag trending on Twitter. This was used by people trying to recreate the legendary treat at home. Now that’s some good PR work right there. 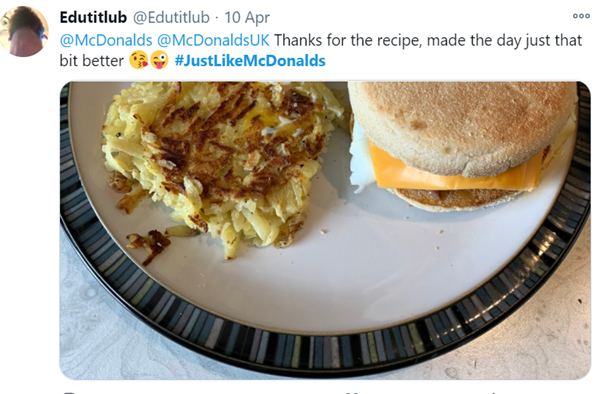 #5 And An Honourable Mention Goes To Four Seasons Total Landscaping

One man’s PR crisis is another man’s treasure. Or something like that anyway. Cutting a long story short, Donald Trump announced that his lawyers would address reporters from the Four Seasons Philadelphia at 11 a.m. But as the Philadelphia Inquirer points out, the tweet came down within minutes, apparently the result of a speedy rejoinder from the hotel the president name-dropped. “To clarify, President Trump’s news conference will NOT be held at Four Seasons Hotel Philadelphia,” its management tweeted. “It will be held at Four Seasons Total Landscaping — no relation with the hotel.” 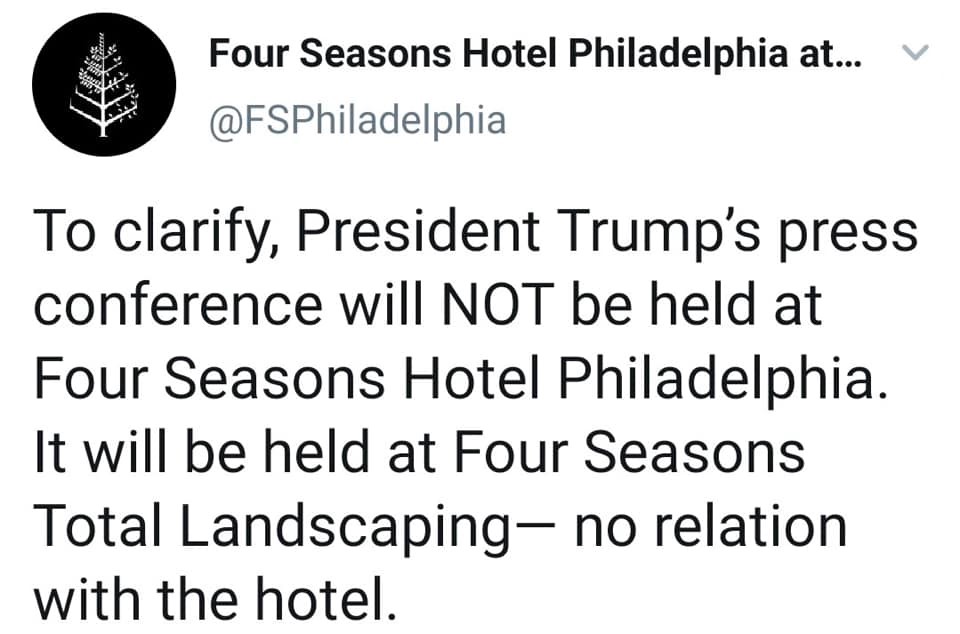 So… the carpark of a landscaping company then. 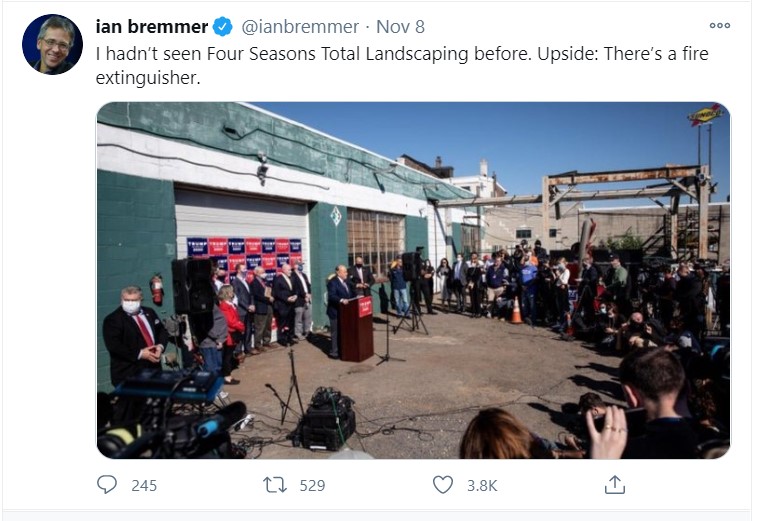 And the response from that landscaping company? Pure PR gold. 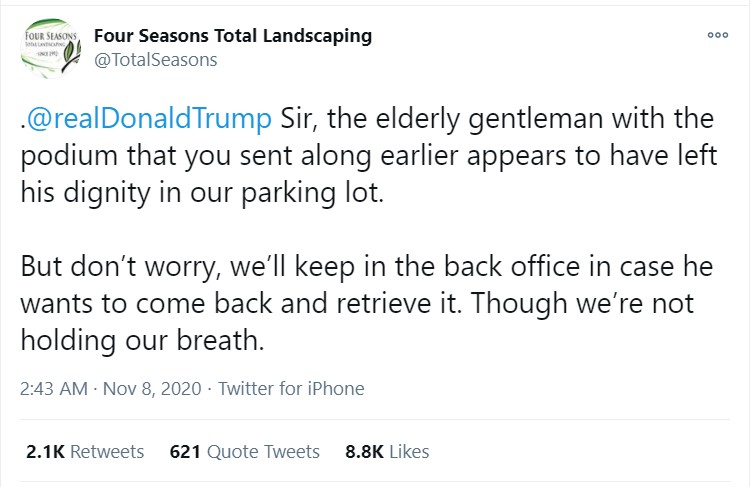 How to Handle a Bad PR Crisis

No matter how careful you are, a bad PR crisis can and might happen. So, while prevention is key it’s important to know how to handle a PR disaster. Here are some useful tips:

Contact Contentworks today to get Socially Sorted. As a leading content marketing agency we can help improve brand awareness and built your online reputation. We also offer a full content marketing solution tailored to your needs including blogs, articles, PR material, web content, e-books, whitepapers, video scripts and more. As an increasing number of businesses go digital due to Covid, we’re here to streamline your strategy.