How NOT To Handle Bad PR

When done right, marketing is an excellent way to promote the ethics of your company and to spread brand awareness. Get it wrong, however, and your efforts could lead to a whole load of bad PR. In an increasingly tech-centric world where users don’t think twice about leaving damaging reviews or harsh comments on social media sites, it’s really important to plan all campaigns carefully and to implement a sign-off process. But what happens when the damage is already done and you’re landed with a heap of bad PR?

Before we look into ways of handling bad PR, let’s take a glimpse at the recent #spycops campaign implemented by Lush. While the cosmetics retailer set out to protest against the behavior of undercover cops who formed relationships with activists they were sent to spy on, the resulting campaigned was viewed by many as an unbiased attack on an already-struggling police force – and it’s easy to see why.

What did they do?

Despite claims that Lush were only addressing “a controversial branch of political undercover policing that ran for many years before being exposed,” the campaign has received headline-making backlash with the general public and the Thin Blue Line viewing the marketing efforts as tasteless and an unnecessary war against all police. Lush’s Facebook page has been infiltrated with one-star reviews with many urging buyers to #FlushLush as a result of the recent marketing material. 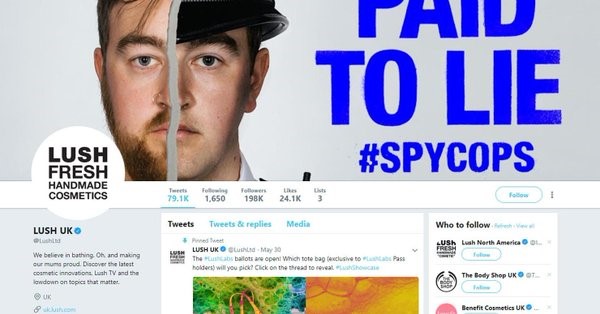 So, were users right to get on their soapbox (no pun intended) and to share their disgust? Well, it all depends on personal opinion, of course, but when a company is faced with backlash they must respond appropriately. At Contentworks Agency we don’t stand in judgement of other brands but we do learn lessons on how not to handle bad PR.

Here are three things you should never to when handling bad PR.

If something goes wrong with a PR campaign, you may feel the strong urge to hide your head in the sand and delete all negative comments – but stop! Pull yourself together and face reality head on. If you hit the delete button, those who are mad will share your ‘go-away-nasty-commentater’ outlook with others and this could lead to further backlash. Remember, people are unforgiving and won’t just go away.

In order to make the best of a bad situation, it’s important to acknowledge the overall public sentiment and to address the issues in question with respect, clearly explaining your point of view. Whether you continue to run the campaign or listen to your followers will likely depend on your overall attitude to controversy and whether doing so could damage your long-term reputation.

If you’re prepared to market online, you should be prepared to handle online consumers who can be anything but friendly when they see something they don’t like on the internet. It’s a dog eat dog world out there and when it comes to PR, you must stand up for yourself. Rather than going completely silent in the event of a PR disaster, you should try to fix the problem by:

3. Be Rude or Offensive

If you want to improve your online reputation and gain the trust of your consumers once again, avoid being rude or offensive even if you feel incredibly frustrated. Remember your ethics morals and tone of voice before releasing any kind of statement or commenting on social posts. Don’t get into any kind of personal arguments with followers online and certainly don’t tell people that their opinions are wrong. Instead, acknowledge areas of concern and thank people for their feedback before continuing to express the company’s views.

To avoid further confrontation, you might want to think about:

Remember that one of the most effective ways to fix bad PR is to create good PR! Positive news stories, fresh content and exciting social media campaigns will all go a long way towards eventually burying the past. Speak to the Contentworks Agency team today to craft a winning content marketing strategy for your brand.

At Contentworks Agency we always credit our sources. Thanks to the following site for providing awesome information