With a focus on making the finance and blockchain sector relatable through content marketing, Contentworks also places a high emphasis on equality. As active participants within the blockchain space, we believe the technology can provide a level playing field for everyone to succeed. Throughout the Women in Blockchain series we will be interviewing senior women from the blockchain sector to learn about their challenges, successes and ambitions for blockchain technology.

In this episode of Women in Blockchain, we’re meeting Amy Vernon. Amy is a digital Swiss Army Knife. She started her career working at The Miami Herald, where she was a member of the staff that won the Pulitzer Prize for Public Service for coverage of Hurricane Andrew. Since then, she’s worked with media companies, social analytics platforms, apps, and the American Museum of Natural History. She co-founded a predictive analytics platform for news publishers and was the top female submitter of all time on Digg.com when that meant something.

Named the 15th-most influential woman in tech on Twitter by Business Insider and PeerIndex and one of 5 women bloggers to follow by Craigslist founder Craig Newmark, Amy is known for her love of spreadsheets and data, loud mouth about equality in the workplace and photos of her Siberian husky. She’s currently VP of Community for Rivetz, a cybersecurity company that uses blockchain technology and trusted computing. 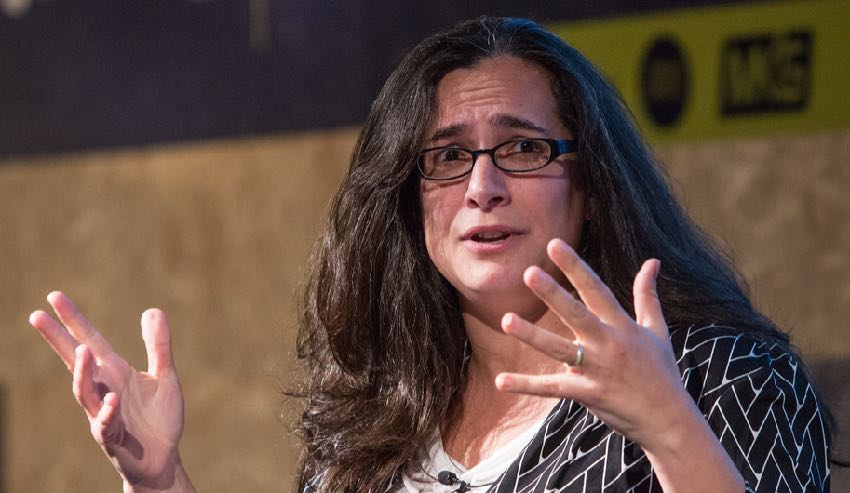 #1 Tell us about your role in the blockchain community right now?

As VP of Community for Rivetz, I manage community on the various social media channels, head up marketing and PR efforts. I support product, HR and business development when needed, make sure anything written for outside consumption by a staffer is edited and fact-checked, and manage a staff of two.

It’s a natural fit for my career, as I spent nearly two decades as a newspaper journalist and have spent the last decade in the tech startup space in and around New York City. I’ve always been a tech geek, having learned BASIC in middle school and being self-taught in HTML, among other tech skills. I’m not a technologist by any means, but I am interested enough in it and competent in enough basic skills that I can have a conversation with someone and get what they’re talking about.

That meant when it came time to jump into my current role in the Venn Diagram of blockchain technology and trusted computing, I had two fields I needed to get up to speed on quickly – akin to learning to ride a bicycle by being placed on the seat of a 10-speed in motion.

That’s one of my favourite things, though – having to learn complicated things quickly. There’s a real sense of accomplishment when you have been trying to grasp a complex topic and that light bulb goes off.

I’ve been fortunate to have spoken at various conferences over the past year on blockchain community, blockchain fundamentals, the concept of blockchain and identity. It’s a really interesting technology and I’m glad to be a part of the movement.

#2 What were your first impressions of blockchain?

Well, truth be told, the first time I heard about blockchain, it wasn’t being called blockchain. As a former power user of the old Digg.com, I heard about the Satoshi white paper pretty much when it came out, because it was almost immediately submitted there. Back then, those of us who spent a lot of time featured on the front page of Digg knew everything that was on there and read much of it.

I didn’t focus too much on it at the time, I’ll admit, but was curious about this “pretend money,” as I thought of it. Then people started posting about Dogecoin, and I was all, “Yeah, this is pretend money.”

Over the years, when bitcoin came up, it would catch my attention and I’d read up to see what was happening. For a few years, that consisted of a pizza purchase, Mt Gox and Silk Road. It was obvious Bitcoin wasn’t going away, however, and when conversation turned to the technology underlying Bitcoin and Ethereum made its name, I started reading up more on what was going on.

#3 What made you want to be a part of the blockchain scene?

I’ve met so many terrific folks since I’ve gotten involved in blockchain. And as I was dipping my toe in, I came to discover that many folks I really respected also were migrating into the field. Honestly, being involved in an emerging technology from early days (not its infancy, of course, but still early-ish) is energizing. There’s a lot to learn and everyone’s kind of learning it together. Even those who were involved from the earliest days are only now starting to see real-life uses of the technology that aren’t cryptocurrencies.

#4 Do you think the blockchain scene promotes equality?

No less than any other field. However, there are some ways where there’s potential for it to be better. For example, my friend Leah Callon-Butler is co-founder of intimate.io. The token is a cryptocurrency for people in adult industries – primarily in sex-related jobs. It’s extremely hard for anyone involved in the sex trade – whether that’s legal prostitution, “cam girls” or any other role – to get a bank account or a line of credit, simply because of their job. Even if that job is completely legal.

The goal of Intimate is to enable people in these markets to earn a living without having to stash money in their mattresses or even in a safe in their closet; and to be able to receive payment online without high transaction fees.

That’s obviously just one example, but it shows how blockchain and cryptocurrency can level the playing field in certain ways that fiat has been unable or unwilling to.

Besides all that, I’ve met tons of interesting women in the blockchain space. While I think the investor class is disproportionately male, I don’t necessarily think that ratio is the same among those who are actually working on and shipping products. It’s just that the bro-topias and bikini cruises get more press.

#5 How do you overcome gender specific challenges?

The best advice I ever got was from my last editor. I was complaining about how his bosses’ reaction to my saying the exact same thing a guy had said was different. It wasn’t fair, and I was tired of it.

“You’re right; it’s not fair,” he said. I stopped and looked at him. I guess in a way I just wanted someone in a position of power to admit that simple fact. He went on to tell me that in a way, it doesn’t matter if something isn’t “fair”. You have to find the way to do things that works for you. What works for one person isn’t going to work for another.

At the end of the day, if you can get the job done, get it done, and do it the way that works for you.

Now, as I write this, it’s exceedingly obvious. It’s just that it’s harder when you’re in that situation. Life’s not fair, as I tell my children. Allow yourself to feel that. Then suck it up and figure out how to get things done.

#6 How do you see blockchain shaping our future?

Truthfully, I don’t think anyone really has the answer to that yet. I don’t know that it’s the world-changing technology some seem to believe it is. That’s not a slam against blockchain, by any means – I just mean that technology alone can’t fix problems. The people using it need to find the problems it can actually solve and use it in that way.

I think one of the biggest solutions the cryptocurrency side of blockchain offers is for the unbanked and underbanked around the world – tokenizing funds and enabling people to save for a rainy day without having to get a bank account they have to pay outrageous fees to keep up or stuffing money in a mattress.

For the technology itself, blockchain will truly help us ensure that we know how and when things happened. It will solve many supply-chain issues, keeping a strict record of transport and custody in a way that human beings have always found ways to get around.

#7 What advice would you give to newbies?

The first thing I’d tell a newbie is not to be afraid. No one is really an “expert” in the field. There are some folks who have strong expertise in specific areas, of course, but it’s so new that there’s plenty of room for others to join in. Even those who have been in the space for a while now are learning new things every day.

Something that was a huge help to me when I started out was taking the University of Nicosia’s MOOC, Introduction to Digital Currency. Though it focuses on the cryptocurrency side of things, it still gives a strong grounding in the fundamentals of blockchain itself. It helped me wrap my brain around certain aspects when I was trying to learn as much as I could as fast as I could. (Full disclosure: I’m now on the executive board of the New York City chapter of UNIC’s Decentralized community.)

Ask questions. People in the space tend to be really happy to share their knowledge. In almost every city, there are meetups dedicated to blockchain and crypto. While many are social events, many others are educational events. Don’t be intimidated into not checking it out. If it interests you, learn more!

Thanks to Amy for her insightful interview. Contentworks Agency is at the centre of marketing for the blockchain sector. We stay up to date with the latest technological developments and regulatory news to help finance companies and ICOs succeed. If you enjoyed this episode of Women in Blockchain, please share it with your networks. For more information about blockchain marketing services connect with our team here.

Loading...
Contentworks > The Content Bar > Tech > Women in Blockchain – Amy Vernon
« Irritating Brand Behaviour And How to Avoid It
See You in the Den! »