When a tech giant pulls the plug on its very own social networking platform, ears prick up. Well, ours did anyway. Google+ (G+) has been dying a long, slow death for many years now. But as we prepare to say goodbye for good, it’s worth considering: was G+ really that bad? And what went wrong for the social media network that never really managed to get off the ground? Join us as we prepare to say goodbye G+.

Data breaches and security flaws make headlines. Just ask Facebook! So, when the Google team found a security flaw that gave developers access to personal data of 500,000 Google+ profiles even when the relevant information had not been marked as ‘public,’ they clearly had a problem on their hands. In reality, this was probably a much-needed catalyst to end the ailing initiative, with Google themselves making two very telling comments.

Not only did they say that “the consumer version of Google+ currently has low usage and engagements.” But they added that “90% of Google+ user sessions are less than five seconds.” Ultimately, this sums up the sad state of a service that launched in 2011 with such hope.

To place all the blame on a security flaw would over simplify the problem. Indeed, according to former Google+ designer, Morgan Knutson, the problems ran far deeper. Following news that Google + would close, the disgruntled ex-employee released a Tweetstorm of reasons why the platform went under, posting over 200 tweets. Airing his dirty laundry in public, Knutson chronicled his 8 months working with Google as part of the 2011 Google+ design team. 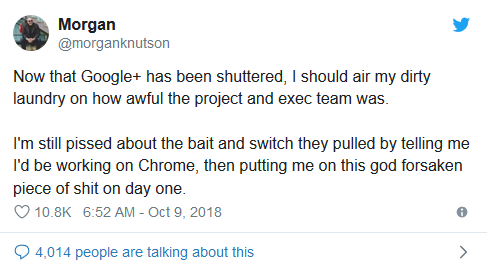 His issues largely revolved around poor management, disorganisation and the apparent constant need to chase Facebook. This was reportedly due to a fear of losing the race to Google’s tech-giant competitor. In short, there was a “distinct lack of clear vision.”

Another major issue according to Knutson is that G+ had been made without consideration of the Google eco-system and therefore didn’t offer a consistent consumer experience.

Not all Doom and Gloom

As Google+ closes its doors, it’s easy for the platform to become the butt of all jokes. A poster boy if you like for social media fails. While that’s understandable, it wasn’t all doom and gloom for the platform.

Indeed, while mainstream adoption dwindled and Facebook became clear winners of the social platform race, G+ was popular among certain groups, particularly photographers. The Landscape Photography Community had more than a million members with Street Photographer’s, 369,163 members sharing boatloads of photos each and every day.

The Art of Bread (for bread makers and lovers), Board Games (for board game enthusiasts) and Toy Photographers (primarily close-up shots of Lego men and other tiny toys) were also engaged communities on the platform.

A Playground for Google

G+ was a playground for Google too, serving as a testbed for features that had a clever concept and were eventually turned into standalone apps. These include:

Hangouts – now available to download on Google Play, Hangouts was active on G+ and makes it easy for people to keep in touch by messaging contacts, starting free video and voice calls or hopping on a group conversation.

Google Photos – This app can also be downloaded following a trial period on G+. It automatically organises photographs into folders and categories making them easy to share.

Other standout features included Circles which focussed on communities long before Facebook set up the Groups option. Streams also allowed you to see specific updates from particular circles rather than everyone at once with Sparks making it easy to discuss certain topics with like-minded people, easily, online.

Google+ may not have achieved its full potential but it certainly leaves behind a legacy. Most millennials, for instance, will have dabbled with the platform at one time or another and may even be grappling with the idea of saving the data they once posted in G+ territory.

It’s certainly the end of an era. But will the closing of the platform cause us great distress? Probably not. Will it impact marketers? Well, for those who built up certain communities it will be a case of changing tactics. But most likely, many companies these days have an omni-channel marketing strategy making it easy to continue promotions and discussions via other places such as Facebook, Twitter, Telegram, Medium and so on.

What Should You Do?

If you have a G+ page or company profile then there are some actions you should take immediately.

The Alphabet-owned company will wave goodbye to G+ forever in April 2019. Google will remain a household name, Facebook will continue to dominate social media and life will go on. Farewell G+!

At Contentworks, we’ve got our eye on the latest digital, tech and finance developments. If you loved our G channel then you’ll love our Medium channel too.